Background: Diastolic dysfunction is a problem, due to an impairment in the filling properties of the left ventricle (LV), indicating future heart failure. In obese patients, this problem is a prevalent cause of heart failure in which the systolic function is maintained. Aim of the study: This study was conducted to evaluate the independent effect of increased body weight with different degrees on LV diastolic function. Patients and methods: A retrospective cohort study was done at Al-Sader Medical City in Al Najaf City, Echocardiographic Department during the period from March 2018 to March 2019. 120 patients (age: 61.59 ± 13.9 years) were chosen and LV diastolic function, body mass index (BMI), and waist circumference (WC) were assessed. The patients were divided into 3 groups based on their body mass index (kg/m2): [obese < (29.9); overweight, (25–29.9); normal, (18.5–24.9)]. Peaks late (A) and early (E) transmitral velocities and also peak early diastolic mitral annulus velocity (E′) were measured. Data analysis and management were done by using the SPSS software version 24, 2013. Results: Diastolic dysfunction in the obese/overweight groups was considerably higher than the group with normal BMI. By analyzing the multivariate regression, BMI, and other characteristics, the independent and direct effect of BMI on diastolic function was demonstrated [OR: 2.65; confidence interval (CI): 1.46–5.76; P = 0.007]. Conclusion: Obesity and overweight have a negative independent effect on diastolic function‎.

Currently, Obesity is a major cause of preventable death and it increases the risk of dyslipidemia, hypertension, type 2 diabetes mellitus, cardiovascular disease (CVD), stroke, cancer (breast, colon, and endometrial), osteoarthritis, obstructive sleep apnea, and other diseases. These risks increase with rising BMI. Obesity is also associated with reduced quality of life, impaired physical functioning, and increased health care costs. Central adiposity (waist circumference >102 cm [40 in] in men and >88 cm [35 in] in women) increases the cardiovascular risk independent of BMI [1].

Obesity increases steadily throughout the world and becomes a leading health problem because it is associated with mortality, morbidity, and CVD [2-4].

Diastole is a Greek word meaning (“expansion”), defined as the time between the aortic valve closure and mitral inflow termination. On the ECG diastole is the time between the end of QRS complex and T-wave. A normal diastolic function is as the left ventricle ability to guarantee enough stroke volume at the low-pressure state and its capacity of receiving a filling volume [5]. diastole is divided into 4 phases:

Echocardiography is more accurate than ECG in determining the duration of diastole, and to distinguish between the different phases of diastole. Both PW Doppler of mitral inflow and LVOT flow are used to measure diastolic time intervals as shown in (figure 1). Tissue Doppler at the mitral annulus is also used to assess the various phases of diastole:

LVDD is a condition that shows the impairment in the filling properties of the left ventricle, which is a predictor of heart failure in the future [9-12].

Various factors can cause diastolic dysfunction such as extrinsic factors, myocardial compliance decrease, and abnormal relaxation.

Relaxation: depends on the normal function of the ventricle and is disturbed when the systolic function is impaired, for example in diastolic function abnormalities, myocardial ischemia, and cardiomyopathy.

Compliance: This is a way of determining the ventricular stiffness and describes the ventricle ability to expand during diastole [5]. 3 factors can reduce the ventricle compliance:

LVDD may even be asymptomatic and identified occasionally during a Tissue Doppler-echocardiographic examination. This is important as a diagnostic tool because of its high feasibility of transmitral Doppler indexes of diastolic function (E/A ratio, DT, and IVRT), and is satisfactory for serial assessments over the time.

Obesity can be a predictor of incident heart failure in the general population, and evidence suggests that overweight status also increases heart failure risk, which is intermediate between that of lean and obese persons [16, 17]. Increasing the body size and being exposed to CVD risk factors including diabetes mellitus, hypertension, and hyperlipidemia, have direct effects on cardiac function and structure. The excessive body fat increases in both pre- and afterload because of an increase in peripheral resistance, chronic volume overload, and hyperdynamic circulation [18, 19].

Moreover, increased adiposity leads to the enhanced effect of blood pressure on the mass growth of LV [20]. LVDD might, therefore, be a pathophysiological link between the body weight gain and the onset of heart failure in the future. Cardiac structural changes and cardiovascular risk factors associated with overweight/obesity are also the main determinants of the diastolic function of LV [21, 22].

Aim of the study

This study was done to assess the independent effect of different degrees of increased body weight on LV diastolic function.

A cohort retrospective study was conducted at the Cardiology Centre, Echocardiography Unit in AL-Sader medical city during the period of March 2018 to March 2019.

The study was approved by the scientific council of Arab board for health specialization and informed consent was obtained verbally from all study participants.

We evaluated 120 participants who referred to the outpatient echocardiographic department and had medical record filled including demographic data (clinical status, gender, and age) were obtained via physical examination and detailed history-taking. Clinical conditions and risk factors were identified based on the self-report of the patients’ history, WC, blood pressure, heart rate, and BMI, with a resting electrocardiogram tracing for each participant. BMI was calculated as weight (kg) divided by height squared (m2). The overweight was defined as a BMI between 25.0 and 29.9 kg/m2, and obesity as 30 kg/m2 and above, based on the standard definition [23].

If the patients fulfilled the following criteria, they were eligible for inclusion: sinus rhythm approved informed consent, age <65 years, and did not have exclusion criteria

Transthoracic echocardiography was conducted using a commercially available system (Vivid E 9) by a trained physician following a standardized protocol. The linear dimensions of LV were measured from a parasternal long-axis view according to the American Society of Echocardiography recommendations [16]. The relative wall thickness of LV was calculated as follows: (2* posterior wall thickness divided by end-diastolic diameter) [19]. The LV ejection fraction was calculated by biplane modified Simpson’s rule. For the assessment of left ventricular diastolic function [13] from an apical 4-chamber view, the transmitral flow was sampled by pulsed-wave Doppler at the level of mitral leaflet tips. Peak velocities of the early (E) and late (A) phases of the mitral inflow were measured, and their ratio (E/A) was calculated. Myocardial velocities of LV were analyzed by Tissue Doppler Imaging (TDI). Pulsed TDI sample volume was placed at the level of the septal and lateral mitral valve annulus, and the peak early diastolic velocities (E’) were measured [20]. The E/E’ ratio was calculated as an index of the filling pressures of LV [21]. Diastolic dysfunction was defined as 1) E/A <0.8, DT >200 ms , IVRT >100 (impaired relaxation, grade I); or 2) E/A >0.8 and <1.5 and E/E’>8 cm/s DT 160-200 ms, IVRT (70-100 ms) (pseudonormalized pattern, grade II); or 3) E/A >1.5 and E/E’ >8 cm/s DT <160 ms ,IVRT <60 ms (restrictive pattern, grade III) [22, 24-27].

SPSS Software version 23.0 was used for statistical analysis. Categorical variables are shown as number and percentage, and continuous variables are presented as mean ± standard deviation. The comparison of study groups was done by using the chi-square test for categorical data and Student's t-test for continuous data. P-value of <0.05 was considered statistically significant.

Out of 120 studied subjects, (mean age of 43.85± 13.27 years, minimum 23, maximum 63) were eligible; 60 subjects had a normal BMI (group 1), 60 had abnormal BMI (overweight/obesity), 37 were overweight (group 2), and 23 were obese (group 3). Table 1 shows the gender and age distribution among the studied groups: there was not any significant difference between the groups regarding gender and age.

Abnormal WC was encountered in 9 patients (15%) in group 1, 21 patients (56.7%) in group 2, and 23 patients (100%) in group 3. Out of the 9 patients with normal weight obesity (group 1), 2 had LVDD (1 pseudonormal pattern and 1 impaired relaxation,). Table 2 shows the clinical characteristics of each group of participants expressed as mean and standard deviation.

There is no significant difference in EF %, IVRT, RWT, and LVESD among the studied groups (p-value>0.05). Echocardiographic results are shown in Table 3.

Data are expressed as percentages and counts.

Data are expressed as percentages and counts 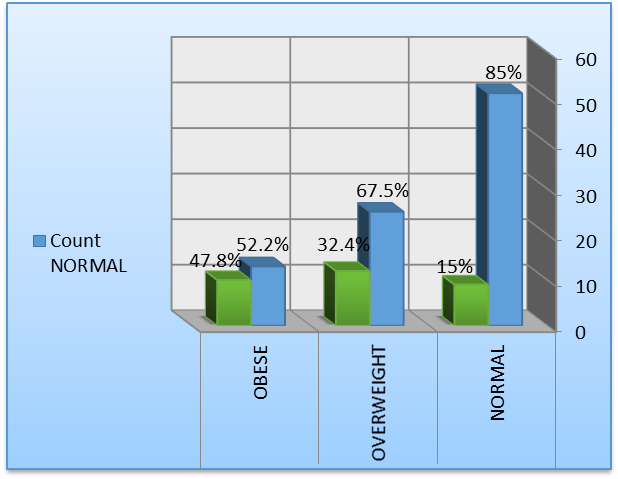 Figure 1: LVDD in the studied groups

For identifying factors with independent impact on LVDD, multivariate regression was analyzed and showed that the increased age and BMI had an independent and direct effect on diastolic dysfunction [OR: 2.65; confidence interval (CI): 1.46–5.76; P = 0.007] (Table 6).

In this study, we showed that increasing age and abnormal BMI are independent determinants of LVDD. The relationship between diastolic dysfunction and BMI parameters is continuous and independent of cardiovascular risk factors. Moreover, the severity and prevalence of LVDD were progressively higher from group 1 to group 3. Similarly according to the recent studies  conducted by Kossaify., Kishi et al., C,il, et al., and Russo et al. [28-31] raising an individual's BMI predisposes him/her to LVDD, with a particular highlight on the TDI’s role in assessing the diastolic function in obesity [29, 32].

There was not any significant correlation between LVDD and gender specification, which was similarly found in other studies [28-31].

By using TDI parameters diastolic abnormalities could be detected in the participants who would be classified as normal by Doppler flow analysis alone [26]. Furthermore, E/E’ ratio was used as the indicator of LV filling pressure [27] and an independent predictor of cardiac events including heart failure and myocardial infarction [36]. In this study, the increased filling pressure was more prevalent in group 3 and the difference, measured by traditional Doppler analysis of mitral inflow and TDI-derived parameters, was significant.

LVED, DT, and PWT were found in our study to be significantly correlated with BMI, suggesting an abnormal relaxation and this has been similarly reported by Çil et al., Russo et al., and Kishi et al. [29-31].

While IVRT and RWT were not significantly different among the studied groups, which is consistent with the studies conducted by Çil, et al. and Russo et al. [30, 31].

Moreover, we found no relationship between the LV ejection fraction and obesity, which is consistent with the results of other studies [29-31.

Our results showed that:

Alpert MA described a pathophysiologic mechanism for the cardiomyopathy of obesity, which begins with increasing the LV volume and cardiac output. These changes may theoretically lead to LVDD and the eventual LV systolic function impairment [19]. Kasper et al. reviewed clinicopathologic findings of all patients who underwent endomyocardial biopsy for dilated cardiomyopathy at a single institution. The percentage of obese patients with idiopathic dilated cardiomyopathy was significantly greater than the lean patients (76.7% vs 35.5%, p=0.001) [37].

Obesity and overweight have a negative independent effect on diastolic function as evaluated by TDI.

WC and BMI should be evaluated more frequently to identify patients who are at risk of LVDD and who are likely to benefit from efficient measures including physical rehabilitation or weight reduction. The TDI technique is almost simple to perform. It has been proven to provide accurate prognostic and diagnostic values in LVDD, and so its regular use is essential in daily practice.