The polymers are applied widely in the preparation of controlled release dosage forms. The model of drug release provides important information about the mechanism of their effect on drug release and clarifying the method of drug transmission within the tablets in comparison with its macroscopic appearance. The article will discuss the structure, charge, physicochemical properties, and concentration of polymer on the rate and the mechanism of drug release. The properties of the drug, the dissolution medium, and the other ingredients and their effect on drug release will be discussed. Moreover, the article will provide information about their uses in pharmacy and medicine. The article's goal is to focus on the effects of mixing different polymers with drugs and other ingredients on the preparation of controlled release dosage forms and to elucidate the drug release mechanism.

Polymers are widely used in our daily life [1] and classified into many classes according to their composition, as well as their physical basis [2]. The monomers are the basic property of the polymer. Other properties such as the microstructure, the polymer size, and length of the chain play an essential role in determining the physical properties and predict the polymer behavior [3, 4]. Altering the microstructure of polyurethane urea material (PUU) identified the micromechanisms governing mechanical behavior and improved the effects of the varying microstructure of the material [5].

The microspheres of Polylactic co- glycolic acid (PLGA) are controlled release drug delivery, releasing drug molecules over long periods of time and maintain drug concentrations in its effective range, and improve patient compliance as compared to conventional regimens [6]. PLGA has been used as controlled-release dosage forms [7-11] because they are biodegradable and bioabsorbable which facilitate degradation and resorption of the polymer in aqueous dissolution medium and the living tissues [12, 13].

Hydroxypropylmethylcellulose (HPMC) is used in the formulation of hydrophilic matrices to obtain controlled release drugs. It is a water-soluble, hydrophilic, nonionic cellulose and stable over the pH range of 3 to 11 and is enzyme resistant [14, 15]

The privilege of controlled release products in the pharmaceutical field are well known [18-20] and includes the ability to maintain the desired blood level of a drug over an almost longer time [21]. Currently, some imaging techniques are used in the field of pharmaceutics to determine the drug release. These imaging techniques include near Infra-red (NIR), Magnetic Resonance (MRI), and Nuclear Magnetic Resonance (NMR) [22]. Others have also been utilized in a variety of pharmaceutical applications [23]. Another work reports methods to determine matrices swelling in real-time Fig.1. This work can provide the behavior to choose the appropriate method of drug release. 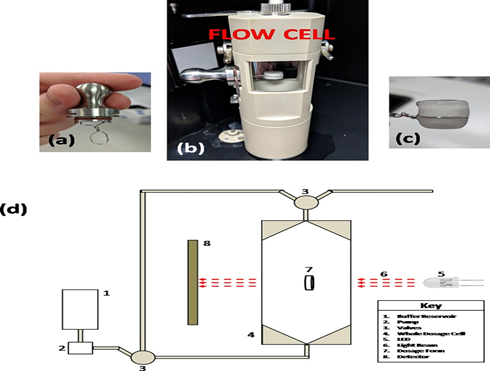 Fig.1. (a) Image of wire tablet holder designed for holding the tablet for swelling studies, (b) tablet holder inserted into the flow cell for image analysis, (c) image of swollen tablet after data acquisition in the flow cell of SDI2 instrument, (d) schematic representation of the surface dissolution imaging instrument (SDI2) with a key inserted in the figure.

Drug release from polymers occurs by:

1 - diffusion-controlled systems: from the hydrophilic and enhance the diffusion of drug from the polymers [24-30](Fig.2). 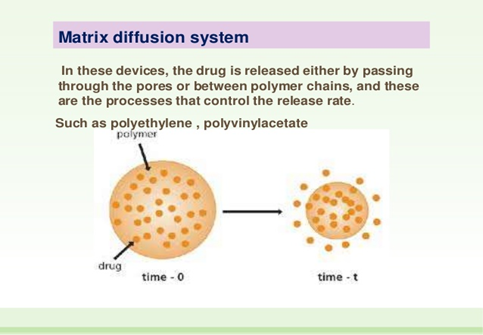 Figure 2: Illustrate the drug release from a matrix of a hydrophilic polymer by the mechanism of diffusion

Figure 3: Illustrate the drug release from a matrix of a hydrophobic polymer by the mechanism of erosion 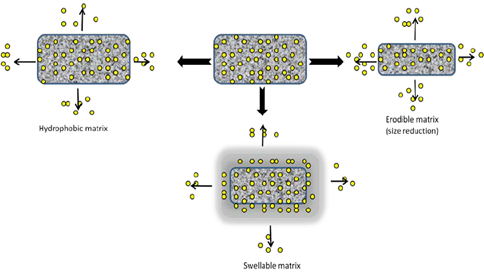 Figure 4: Illustrate the drug release from a matrix with a mixture  hydrophilic and hydrophobic polymers by the mechanism of diffusion and erosion.

The incorporation of the حolymer within the matrices may emerge from the therapeutic benefit of the polymer in addition to that of the drug [38] or biodegraded [39]. Polymers can change drug release and half-life characteristics [36, 40, 41]. The use of polymers resulted in producing tablets that facilitate the delivery of new cytoplasmic drug therapeutics [42-44].

The polymer devices are classified as diffusion-controlled, swelling [45], and biodegradable systems [46].

When the matrices were subjected to the dissolution mediumو more of drug released from the matrices in the early stage from the external boundaries of the controlled-release tablets. This phenomenon has been observed in almost all the experiments done during the previous studies [30, 32-37, 40]. That was due to the high and also extra amount of drug on the external boundaries of the tablets. [29, 37].The initial break of the boundaries can be adjusted by the fabrication technique [47-49] for example the drug sometimes is released from the matrices by diffusion or diffusion through the aqueous pores formed during dissolution at the same time with the polymer dissolution [29, 37, 50].

For highly water-soluble drugs, such as proteins and peptides, diffusion is the mode of transport [51]. For controlled-release with hydrophobic polymer matrices used drug release occurred by attrition or erosion of the matrices without mass transport, which is called eroding polymers. It must be taken into consideration that some drug compounds have low water solubility [52, 53]. So, it is necessary to treat small and large drug molecules and to account for transport before and after the pore formed and the size increased. After the pore size increased the drug release from the matrices increases rapidly.

In general, the dissolution of polymer involves two transport processes, i.e. solvent diffusion and chain disentanglement [29, 36, 53]. Polysaccharides such as sodium carboxymethylcellulose (NaCMC), are stable under physiological pH and temperature, but hydrolyze at extreme pH and temperatures.

Prediction of drug release profiles by mechanistic models is useful for understanding mechanisms and designing drug release particles [54]. In general, diffusion, erosion, and degradation are the mechanisms for solute release from the matrices [55-57]. The basic and most common mathematical models used are:

Where C = the cumulative of drug amount release versus time t and k0 is the zero-order rate constant.

Drug remaining plotted versus time t; and K1 is constant.

Where Q = cumulative percentage of drug release plotted versus time t and KH is the Higuchi dissolution constant.

Where Mt/M∞ is the release rate constant. The n is the different release mechanisms. The value for n depends on the type of transport, geometry, and the rate of chain relaxation [59, 60].

The equation describes a drug release from a polymeric system and the values of 60% drug release were fitted in Korosmeyer-Peppas model [60, 61].

Where Q is the drug released in time t, Qₒ is the drug in the tablet, and Kᵸᶜ is the constant rate for the Hixson and Crowell rate equation.

The aforementioned equations are applied for a range of devices [62, 63].

The pharmacy and medicine polymers are used as a suture material for a long time [64], also for hemodialysis or as drug delivery systems for responsive drug release [65]. Biodegradable polymers remain in the body only to accomplish their function, then they disappear without the need for a second surgical intervention [66-68]. Degradable polymers have been further used for drug delivery along with the degradation from microcarriers or macroscopic applications [69, 70]. The polymers as micro- and nanospheres are used for targeted drug delivery (solid colloids, dendrimers, micelles, nanogels, capsules or core–shell particles) [71-73].

The author would acknowledge Yarmouk University for its support for the work.