Aim: Glimepiride (Glmp) is an oral hypoglycemic drug used for the treatment of type 2 diabetes mellitus. It has low and unpredictable bioavailability that is mainly caused by its poor aqueous solubility and low dissolution rate. Accordingly, the objective of the present study was to improve the dissolution rate of Glmp by cocrystallization with suitable water-soluble coformers. Methods: Glmp was screened with three potential coformers, namely citric acid, tartaric acid, and oxalic acid dihydrate. Formulations were prepared at Glmp: coformer molar ratio of (1:1) and (1:2) using the solvent evaporation method. The obtained products were then characterized by differential scanning calorimetry (DSC), powder X-ray diffraction (PXRD), and in vitro dissolution studies. Results and discussion: Data obtained from DSC, PXRD, and FTIR spectra suggested cocrystal formation. Cocrystals also achieved a remarkably higher dissolution rate than the parent drug. F4 containing Glmp: tartaric acid (1:2) was selected as the optimum formulation. Conclusion: In the present study, Glimepiride cocrystals are introduced as a promising strategy for a possible transition to a suitable drug product.

Solubility is a very important characteristic of drugs [1, 2]; it mainly influences the efficacy of drugs in biological fluids [3, 4]. A wide range of newly invented active ingredients in the pharmaceutical industry is of poor aqueous solubility. This poor solubility results in deprived and variable bioavailability. Concerning the orally administered dosage form, poor solubility is the main parameter that limits the drug absorption to the systemic circulation, consequently prevents the attainment of the required concentration for therapeutic activity. [5, 6] Different techniques are available to improve the solubility of poorly aqueous soluble drugs. [7] These techniques include a reduction in particle size, salt formation, microemulsion, nanocrystals, solid dispersions, inclusion complexes, amorphous dispersions, and cocrystals. [8, 9]

Pharmaceutical cocrystal can be defined as a multi-component crystalline solid that consists of two (or more) neutral molecules held together via non-covalent interactions at a specific stoichiometric ratio. Cocrystals mainly consist of the active pharmaceutical ingredients (APIs) and a coformer, which may be either an excipient or a different drug. [10]

Cocrystals have emerged as a promising tool in improving the solubility and dissolution profile of poorly aqueous soluble drugs. [11] Despite the fact that salt formation represents the simplest and the most commonly used method in increasing solubility of many APIs, its use is limited only to ionizable compounds. In contrast, both ionizable and non-ionizable APIs can form cocrystals. [12]

Glmp is an oral hypoglycemic drug used for the treatment of type 2 diabetes mellitus which belongs to third-generation sulfonylurea agents. It acts by stimulating the functioning of pancreatic beta cells to release insulin and increase peripheral tissue insulin sensitivity. [13, 14] Glmp is a drug with poor aqueous solubility and high permeability which merits it to be categorized under class II drugs in the biopharmaceutical classification system (BCS). This poor solubility and low dissolution rate results in low and unpredictable bioavailability. [15]

Various novel pharmaceutical technologies, such as solid dispersions, nanocrystal,  micelles, and self-nanoemulsifying systems [16] have been used to address the solubility problem of Glmp. This study attempted at preparing Glmp cocrystals and investigated the impact of type and molar ratio of coformers on the dissolution pattern of Glmp from these formulations.

Six formulations containing Glmp: coformer in molar ratios of 1:1 and 1:2, as shown in Table 1, were dissolved in 100 ml of methanol and transferred to a round bottom flask of the rotary evaporator (Buchi, Germany). Then, methanol was allowed to evaporate at 55 ⁰C and reduced pressure (100 mbar) and rotation speed at 100 revolutions per minute (rpm).

After evaporation of methanol, the vacuum was decreased to 50 mbar and held for 10 min to allow complete removal of the residual solvent. The resultant formulations were sieved, then kept in desiccators for further investigation.

Physicochemical characterization of the prepared cocrystals

A differential scanning calorimeter (SAT PT-1000 Linseis) was used to carry out thermal analysis on unprocessed Glmp, coformers, and the Glmp cocrystal samples. A known amount of each powder sample was placed in aluminum pans which were hermetically sealed. The thermal analysis was carried out using a heating rate of 10°C/min covering a heating range of 0-400 °C. The scanning procedure was conducted under argon atmosphere.

The diffraction patterns for unprocessed drug, coformers and the Glmp cocrystal samples were obtained using Shimadzu X ray diffractometer (XRD 6000) equipped with Cu radiation source. The X-ray tube was set at a voltage of 40.0 kV and a current of 30 mA. The measurements were carried out at ambient temperature over 2ϴ drive axis, the scan range of 5000-80000 (degree), and continuous scanning mode.

The dissolution studies of the unprocessed drug and cocrystals were employed using the USP Type II dissolution apparatus containing 900 ml phosphate buffer (pH 6.8) containing 1.5% sodium lauryl sulfate maintained at 37±1oC and stirring rate of 50 rpm. Samples corresponding to 10 mg of Glmp were added into the dissolution vessels. Aliquots (5 ml) were withdrawn periodically and replenished each time with 5ml fresh medium to maintain the concentration gradient. The concentration of the dissolved drug was determined spectrophotometrically at a wavelength of 229 nm. The dissolution studies were conducted in triplicates.

FT-IR spectra were recorded using the FTIR spectrophotometer (Shimadzu FTIR-8400S). Potassium bromide (spectroscopic grade) was mixed with dry samples prior to compression to disks using a hydraulic press. The scans were run in the wavelength region of 400–4000 cm−1.

Data obtained from DSC thermograms are presented in table (2). The thermogram of unprocessed Glmp shows a sharp endothermic peak at 212.5°C, corresponding to its melting point.[17]  The DSC curves of the prepared formulations showed both the absence of peaks that correspond to either the pure drug or the coformers and significant changes in enthalpy suggesting the cocrystals formation. [18, 19]

All the prepared formulations, except F2 and F6, exhibited lower melting temperature (Tm) than both Glmp and the coformer. It has been reported in the literature that Tm of cocrystals might occur between the melting peaks of the parent drug and the coformer or reduced below that of both components. Reduced melting events have a positive influence on the solubility of the product. [20]

The appearance of higher endothermic peaks in F2 and F6 is less frequently seen in cocrystals. However, it has been observed in other studies as in dexlansoprazole cocrystals. [21] DSC curves of Glmp, tartaric acid, and F4 are depicted in figures 1, 2, and 3 respectively. 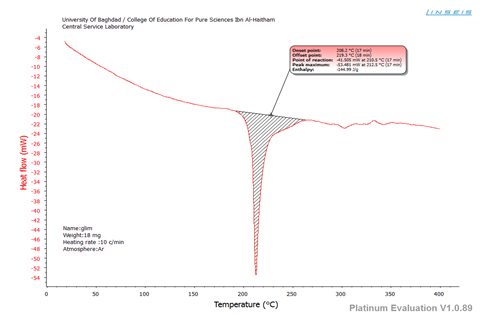 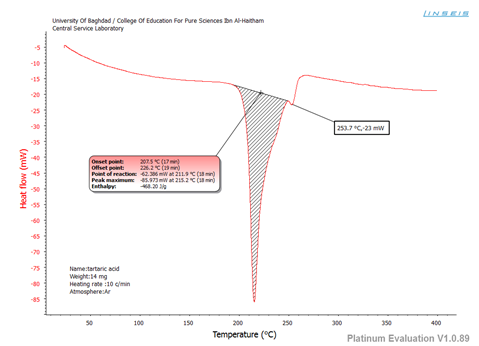 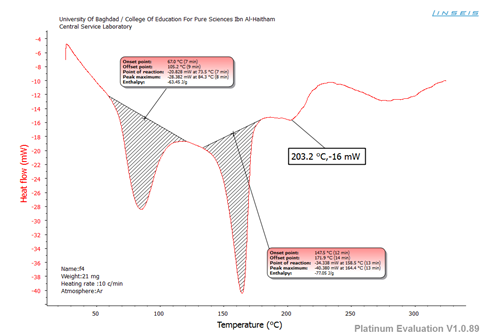 The appearance of additional peaks, not related to either the pure drug or the coformer, in the spectra of all formulations (F1-F6) clearly implies the formation of a new crystalline phase. [22] This has been observed in X-ray spectrum of the optimum formulation F4, depicted in figure 6, as it showed unique peaks when compared to the diffraction pattern of GLMP or tartaric acid (figure 5). 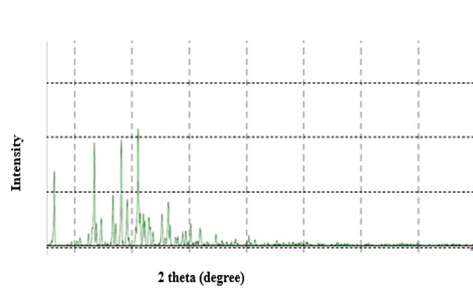 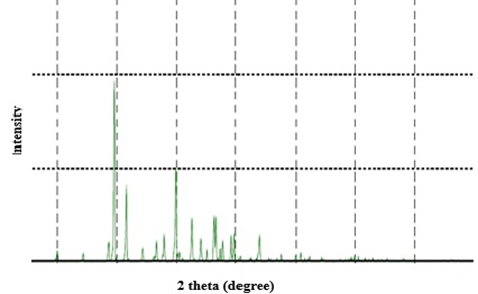 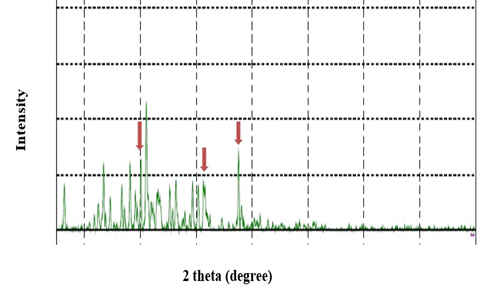 The dissolution profiles of the unprocessed Glmp and the corresponding cocrystals prepared using citric acid; tartaric acid and oxalic acid dihydrate are depicted in figures 7, 8, and 9 respectively. The results clearly revealed that cocrystals have markedly improved the dissolution pattern of Glmp. The remarkable increase in the dissolution rate could be explained by the modification in the crystal habit where molecules might be arranged in less packed crystalline arrays via weaker intermolecular bonding compared to the parent drug molecules. This explanation is strongly supported by the data obtained from DSC and PXRD implying the production of new crystalline states. [23]

A higher dissolution rate also might be attributed to the fact that the coformers used in the study are highly soluble in the aqueous medium, which leads to dissociation of the cocrystals to its components and thereby allowing fast dissolution. [24]

To investigate the impact of the coformer ratio on the dissolution patterns, cocrystals were prepared at molar ratios 1:1 and 1:2 with all coformers used in the study.

F1 (1:1) and F2 (1:2) containing citric acid liberated 67.59 and 81.01 percent after 45 minutes, respectively. It could be inferred that increasing the quantity of citric acid has achieved a significant impact on the dissolution rate, and thus indicates co-crystal formation at a molar ratio of 1:2. [25] Similarly, tartaric acid quantity had a significant influence on the dissolution rate. F4 (1:2) was superior compared to F3 (1:1) by which it liberated 99.92 percent of the labeled amount in only 5 minutes while F3 released 63.35 percent at the end of 60 minutes. Therefore, cocrystals formation at 1:2 stoichiometry could be considered. [24]

A reduction in the release rate was observed after increasing the molar ratio of oxalic acid dihydrate from 1:1 in F5 into 1:2 in F6. This finding could be attributed to a modification in the crystal lattice causing an increase in the density of the cocrystals, thereby lowering the dissolution rate of Glmp from cocrystals. [26, 27] Based on the above results, F4 was selected as the optimum formulation as it exhibited the fastest release rate. 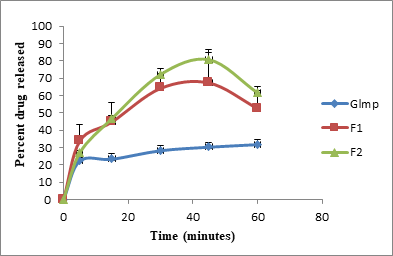 Figure 7: In vitro dissolution behavior of Glmp, F1, and F2 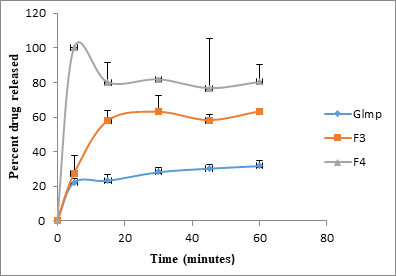 Figure 8: In vitro dissolution behavior of Glmp, F3, and F4 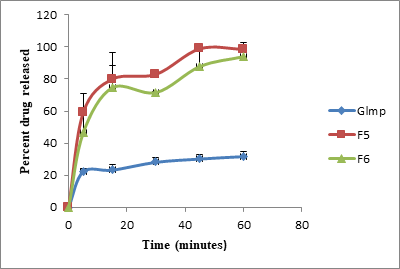 Figure 9: In vitro dissolution behavior of Glmp, F5, and F6

Cocrystals are multicomponent assemblies stabilized primarily through hydrogen bonding. FTIR spectroscopy has been implemented to detect these interactions based on observation of significant alterations in the absorption spectra compared to the original spectra for the parent compounds. The spectrum of Glmp exhibited peaks at 3369.75 and 3288.74 cm-1 assigned to NH stretching bands for urea, peaks at 1350.22 and 1159.26cm-1 corresponding to the sulfonamide (S=O) group and peaks at 1707.06 and 1672.34 cm-1 corresponding to the carbonyl group (C=O). This spectrum is consistent with those reported in the literature. [16]

The spectra of citric acid, tartaric acid, and oxalic acid dihydrate exhibited the characteristics peaks corresponding to C=O stretching vibration occurring in the region (1760-1690) cm-1 and the broadband assigned to carboxylic acid hydroxyl group in the region (3300-2500) cm-1. [28] The spectra of cocrystals formulations F1-F6 revealed prominent changes in peaks corresponding to S=O stretching vibration of Glmp as alterations in frequencies (table 3). A similar observation has been recorded for peaks assigned to C=O of the acid. Besides, the decreased intensity and the recorded changes in the shape of the absorption band corresponding to the hydroxyl group of carboxylic acids suggest hydrogen bonds formed between the hydroxyl group of acid with S=O group in Glmp. [29] Figures 10, 11, and 12 depict the FTIR spectra of Glmp, tartaric acid, and the optimum formulation F4. 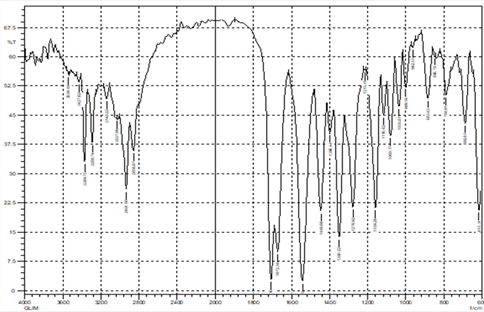 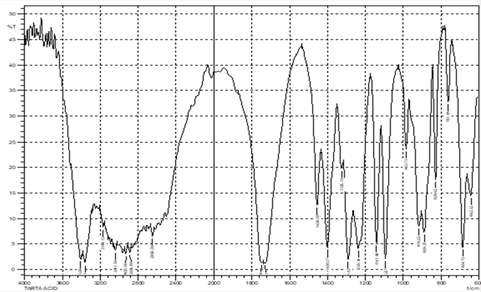 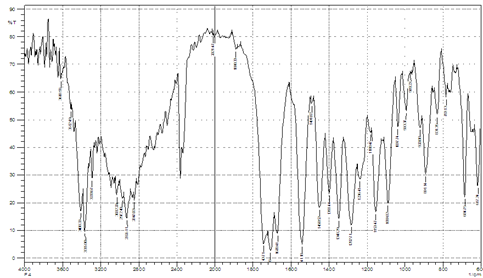 In conclusion, the cocrystallization of glimepiride with water-soluble coformers might be considered as a promising approach with improved dissolution rate profile. Further in vivo analysis for the selected formula is recommended so that it may extend into a suitable drug product.

The authors are extremely grateful for the provision from the University of Mustansiriyah (www. uomustansiriyah.edu.iq), Baghdad, Iraq.