Soybean is considered the first source of high-value and the secondary co-products as anti-oxidant, vitamins, lecithin, nutraceuticals [1], and phytoestrogens [2]. Its oil is among the most commonly used oils [3, 4]. Soybean oil was a good source of Poly-unsaturated fatty acid, ω -6, and ω -3 fatty acids without any traces of trans fatty acid [5]. On the other hand, to increase the melting point of soybean oil (SO) we have to mix it with FHSO, which also is considered trans free. Hence, a binary mixture of SO was used as an alternative to partial hydrogenation for manufacturing shortening, margarine, and confectionary [6, 7].Hydrogenation is often done partially for the formulation of functional shortenings and confectionary coting with the hydrogenated vegetable oils.

However, during partial hydrogenation of vegetable oils, around 50% of trans fatty acids are formed because some of the cis double bonds isomerize their trans forms [8, 9].

In 2003, United States Food and Drug Administration (FDA) and The American Heart Institute required mandatory labeling of trans fats on the Nutrition Fact labels on packaged food to inform the consumer about the heart risk of eating it. The consumer should be aware that the products contain 0.5 grams of trans fatty acid still are labeled as “Zero gram of trans fat”. However, less than 10% of the daily energy from saturated and trans fats are allowed to be consumed [20].

Rheology is a part of mechanics that studies the deformation and flow of matter in response to an applied stress. The capacity to undergo extensive flow, but yet exhibit a substantial solid character is a desirable material property for essentially all industrially useful fat systems [16].

The rheological properties of edible oils are of great importance for their handling in the food industry and are a powerful tool to understand the structural changes occurring after oil processing. One important, primary rheological property is the dynamic viscosity (resistance of a fluid to flow) [16].

Oils and fats play essential roles in health and are a compact source of energy and fat-soluble vitamins. Additionally, the role of essential fatty acids in the body is proved and the body can not do those itself without using vegetable oils. They improve food properties and facilitate heat transfer [21].

The present study aimed to investigate the physicochemical properties of shortening as a blend of soybean oil, partially and fully hydrogenated soybean oil with different ratios for the production of shortening trans free and low saturated fatty acid.

Brookfield rheometer DV III Ultra was used to measure the apparent viscosity of (SO), and a blend of SO and FH with different ratios (F4S6& F45S55) compared with PH as a commercial one. Samples were placed in a small sample adapter; the SC4-21 spindle was selected for measurement. A thermostatic water bath was provided with the instrument to regulate the sample temperature. The rheological parameters for samples were measured at temperatures 1, 10, 20, 30, 40, 50, 60, and 70℃[22].

Fat or oil is mixed with iodine monochloride solution to halogenate double bonds in fat or oil. Excess iodine monochloride is reduced to free iodine in the presence of potassium iodine, and free iodine is measured by titration with sodium thiosulfate using starch as an indicator. Iodine value measured as mg iodine absorbed per g of sample (5 iodine absorbed), is a measure of the unsaturation of fats and oils.

0.5 g of all samples in the test portion was added into 250 ml glass-stopped Erlenmeyer. 30 ml CH3COOH-CHCL3 was added and swirled to dissolve. 0.5 ml saturated KI solution was added and let stand with occasional shaking for 1 min, and 30 ml H2O was added. Then, it was slowly titrated with 0.1 M Na2S2O3 with vigorous shaking, until the yellow color was almost gone. 0.5 ml of 5 starch layers were added until the blue color was just disappeared. If ≤ 0.5ml 0.1M Na2S2O3 was used, the determination was repeated with 0.01 M Na2S2O3. The blank determination was conducted daily (it must be 0.1 mL 0.1M Na2S2O3). It was subtracted from test portion titration.

According to the AOAC official method [23], 5 g fat sample was added into 250-300 ml Erlean, and 50 ml alcoholic KOH solution was added into the flask. The flask was connected with air condenser and boiled for 30 min until the fat was completely saponified. Then, it was cooled and titrated with 0.5 M HCL using phenolphthalein. The blank determination was conducted on the test portion, using the same pipet for measuring KOH solution and draining for the same time. saponification number was calculated from the following equation:

7.05g well-mixed oil was added to 50 ml alcohol in a clean, dry 150 ml flask, and drops of the oil and 2 ml phenolphthalein were added. The flask was placed in H2O at 60-65℃ to warm, and enough 0.1 M NaOH was added to produce faint permanent pink. 56.4g oil was added into the neutralized alcohol and titrated with 0.1M NaOH, vigorously shaking mixture until the same faint permanent pink appeared in supernate alcohol. Multiply ml 0.1 M NaOH by 0.05 and report as percent free fatty acids expressed as oleic acid. 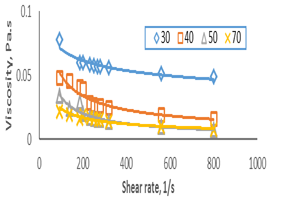 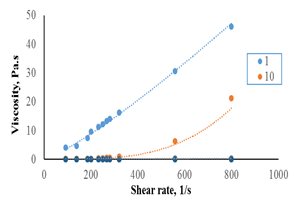 Figure 1: The relationship between shear rate and viscosity for the SO. 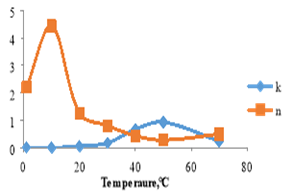 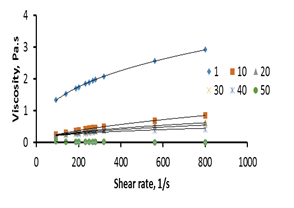 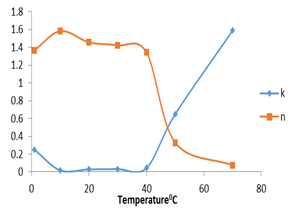 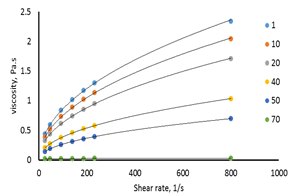 Figure 5. The relationship between shear rate and viscosity for 40:60 (F4S6). 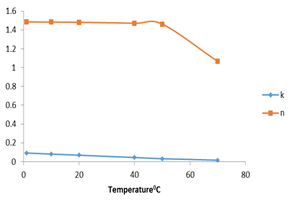 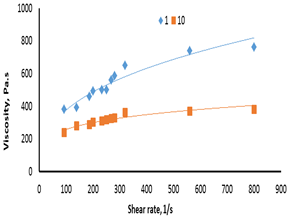 Figure 7-a The relationship between shear rate and viscosity for F45S55 at 1 and 10°C.

Effect of Temperature on Apparent Viscosity

Temperature is an important parameter that has an effect on rheological as heat affects the chemical exchanging and has strong effects on the viscosity of fluids. In many food operations, viscosity-time interactions are required. Soybean seed composition was affected by geographic and environmental factors [27]. Soybean oil is more variable than protein from year to year26]. 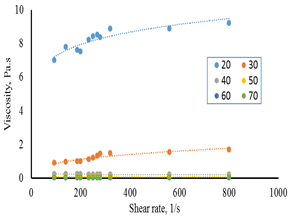 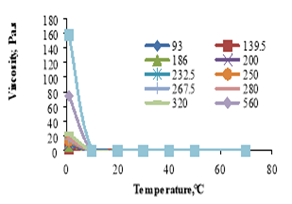 Figure 9. Effect of temperature on the apparent viscosity of soybean oil.

The effect of temperature on apparent viscosity for partially hydrogenated soybean oil was shown in figure 10. Viscosity decreased with increasing temperature at all shear rates. Also, fluctuations in viscosity were observed over a certain temperature range. Fluctuations could be associated with the local agglomeration of the dispersed solid particles around the spindle and increase in viscosity. 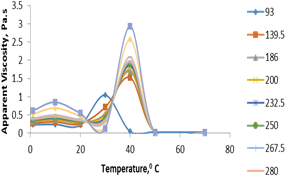 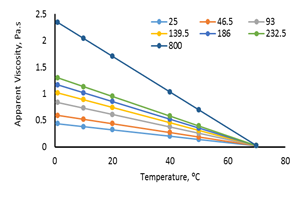 Figure 11.Temperature effects on the apparent viscosity of F4S6. 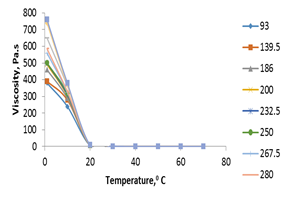 Figure 12.Temperature Effects on the apparent viscosity of (F45S55).

Temperature effects on the apparent viscosity of samples is described by means of the Arrhenius equation as:

Where µ is the apparent viscosity, Ea is the activation energy for flow, R is the universal gas constant, and T is the absolute temperature.By applying logarithms to both sides of Equation (3) it leads to:

Table (1) shows the relationship between activation energy for soybean oil, partially and fully hydrogenated soybean oil at different shear rates. The results revealed that activation energy didn’t give a good trend for all samples studied. This may be due to that the longer the chain of the fatty acyl groups, the more viscous the oil and the greater the Ea.

The acid value indicates the amount of free fatty acid present in the oil. It determines the purity of oils. The higher the values, the lower the possibility of the oils to be used for cooking purpose. The results revealed that acid value for different samples was approximately constant as shown in table 2.

Iodine value measures the degree of unsaturation in fetor vegetable oil and determines the stability of oils to oxidation and unsaturation the fat to be determined qualitatively [15]. The results revealed that the lowest iodine value was for partially hydrogenated soybean oil (51.59) then FH, F45S6, and F4S6 respectively, however, the highest iodine value was for soybean oil. The previous research stated that the lower the iodine values, the greater the oxidative storage stability. The oxidative and chemical changes in oils during storage are characterized by an increase in free fatty acid contents and a reduction in total unsaturation [28].

Within a column, means having the same superscript letters are not significant at P-value of 1%.

We sincerely express our indebtedness to Dr. Mazzanti from dal. University for his kind help and support through the manuscript work.