An evaluation of pharmacotherapy of bronchial asthma in the allergological department of the multidisciplinary hospital is presented. A retrospective pharmaco-epidemiological analysis of 331 medical histories revealed the risks of potentially dangerous drug interactions and adverse drug reactions. The analysis showed potential risks in 79 clinical records, with 15 records showing two or more risks.

Allergy is an inflammatory reaction [1-3], which occurs when the immune system overreacts to some allergens [4]. Bronchial asthma (BA) is a chronic disease. Its course and severity depend on many factors, including the timeliness of administration, rationality, and personalization of pharmacotherapy. The rational approach combines current guidelines based on clinical trials with an assessment of individual risks, such as undesirable drug reactions and potential drug interactions.

Although potentially dangerous drug interactions do not always manifest as clinical consequences in the form of undesirable drug reactions or mitigation of therapeutic efficacy, timely detection of potentially undesirable drug combinations should increase the effectiveness and safety of the pharmacological intervention.[5]

The risk of developing undesirable drug reactions increases with patient comorbidity [10], and with the administration of drugs by narrow specialists working independently of each other. Other risk factors include doctor-underestimations of the patient’s condition, low patient adherence to treatment protocols, improper use of inhalers, the patient’s tendency to take additional drugs to relieve an attack and to refuse basic therapy; all of these can lead to an increase in the severity or prognosis of the disease.[11] Using information services such as decision support systems, in conjunction with medical information systems, databases, and other tools [12] helps reduce the number of medical errors and the risk of undesirable drug reactions.

Objective: Optimization of clinical and pharmacological approaches to the treatment of patients with BA.

This study involved a review of the case histories of 331 patients hospitalized in the allergology department of a multidisciplinary hospital for exacerbation of their preexisting conditions. The risk of drug interactions was determined by reference to the Medscape and Drugs.com databases. Potentially major and moderate levels of negative drug interactions were analyzed by system gradation. Statistical analysis was performed using the SPSS licensed package. Primary sources of information on interactions, undesirable drug reactions, and the pharmacokinetic features of anti-asthma drugs were gleaned from scientific literature and instructions for use obtained from the State Register of Medicines of the Ministry of Health of the Russian Federation (Drug Interactions Checker - Medscape Drug Reference Database).[13]

331 case histories were analyzed. 55.6% of cases were men and 44.4% were women. The average age of patients was 34.6 years. Elderly patients (60 years or more) were 7.6%. The BA pharmacotherapy in all cases complied with the Federal recommendations, and the relevant recommendations of the international agreement GINA were taken into account. Concomitant diseases of hospitalized patients are shown in table 1.

The average number of drugs assigned to one person was 5.7. The obtained data on the identified risks of potentially dangerous drug interactions are presented in figure 1. 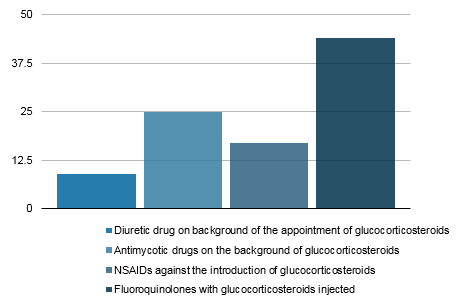 Anti-inflammatory therapy to prevent or reduce the exacerbation of BA includes the systemic administration of glucocorticosteroids; this is strongly associated with an increased risk of undesirable drug reactions and drug interactions. The level of systemic glucocorticosteroids in blood plasma and the severity of their pharmacological effects increases with co-administration of cytochrome P450 3A4 inhibitors. Cytochrome P450 3A4 inhibitors include some antibiotics (clarithromycin, ciprofloxacin, chloramphenicol), antiarrhythmic drugs (verapamil, diltiazem, amiodarone), antiviral drugs, antifungal agents, and food products like grapefruit juice.[14] Of the antifungal drugs prescribed in all cases studied was fluconazole. Fluconazole is a moderate inhibitor of microsomal oxidation. The risk of the interaction of prednisolone and fluconazole is rated as moderate, but it can be increased with the inclusion of high doses of systemic glucocorticosteroids, high-activity drugs, and in cases of long-term sharing.[15]

Where it is impossible to avoid simultaneous use of systemic glucocorticosteroids with CYP450 3A4 inhibitors, especially where there is prolonged use, it may be advisable to prescribe a less lipophilic drug with a shorter half-life and to divide the appointment of systemic glucocorticosteroids and the CYP450 3A4 inhibitor as much as possible within a 24-hour span.

There are known risks of tendinitis and tendon rupture associated with fluoroquinolone treatment; tendonitis and tendon rupture more often affect the Achilles tendon, the shoulder rotational cuff, bicep tendons, and the tendons of the thumb. Tendon rupture can occur during or up to several months after completion of therapy with fluoroquinolones. In some cases, it requires surgical treatment. Risk factors for tendonitis or rupture are over 60 years of age and kidney, heart, and lung transplant recipients. Patients should be advised to stop taking fluoroquinolones, avoid exercise, and active work if symptoms of inflammation (pain and swelling) develop in a tendon area.[16, 17] Co-administration of systemic glucocorticosteroids and fluoroquinolones may increase these risks.

The combined use of systemic glucocorticosteroids and nonsteroidal anti-inflammatory drugs (NSAIDs) increases the risk of damage to the gastrointestinal tract due to reduced production of prostaglandins. There is a three-fold increase in the risk of developing peptic ulcers when no use is compared with the use of NSAIDs or systemic glucocorticosteroids as monotherapy and there is a ten-fold risk when they are combined.[18]

The administration of both loop diuretics and systemic glucocorticosteroids may lead to the development of hypokalemia or hypocalcemia. Symptoms of hypokalemia are weakness, cramps, muscle pain, and heart rhythm disturbances. Some patients may require additional administration of potassium supplements. The loss of calcium that develops when prescribing drugs of these groups can result in drug-induced osteoporosis.[20]

Drug reactions and interactions are a constantly evolving field. Eliminating the risks of drug interaction and the development of undesirable drug reactions is an important element in the development and application of rational, personalized therapies. Best practices incorporating the regular use of information services to assess potential drug interactions and reduce the risk of undesirable drug reactions can reduce medical, economic, and social consequences of poor prescriptive choices leading to fewer and shorter hospitalizations, prevent the development of concomitant diseases, decrease BA symptom severity, and increase patients’ quality of life, their trust in doctors, and their adherence to treatment regimens. Most importantly, it can reduce unnecessary loss of life.

The results of this analytical work were presented to the head of the department and reported at the medical conference in the form of educational materials based on the department’s data. Based on the data obtained, changes to the separation form have been proposed.

There are no conflicts of interest.