Free radical scavenging and biological activity of leaves and roots of Thymelaeahirsuta, collected from Algeria‎

The present work was focused on evaluating the antioxidant and antibacterial activities of the Algerian Thymelaea extracts.The polyphenol content was significant in the methanolic extract of the roots (149,501 ± 0,747 μg EAG/mg), by contrast, in the aqueous extract, the leaves were rich in polyphenols (70.2115 ± 0.876 μg EAG/mg). Thus, the flavonoid content in the leaf extract was higher than the content in the root extract (7.745 ± 0.07 and 6.240 ± 0.21, μg EQ/mg, respectively). Moreover, the methanolic root extract presented the best antioxidant power, with an IC50 of 569.47 μg/mL, which was lower than that of the standard (IC50= 545.13 μg/mL). The antibacterial activity was also tested on seven bacterial strains; all extracts positively reacted with at least one of the tested microbial strains and confirmed that this plant is endowed with antimicrobial properties‎.

Thymelaeahirsuta is a fairly common Mediterranean species throughout Algeria and especially on the coast [1]. Nearly 80% of the world's population uses medicinal plants due to the lack of access to prescribed medicines as well as because of the real effectiveness of plants [2, 3]. For evaluation of the biological activity of these plants, it is imperative to use appropriate biological tests and chemical screening methods [3]. The objective of our study was to estimate the amount of polyphenols and flavonoids in Thymelaeahirsuta as well as the antioxidant and antimicrobial properties of these active compounds in the aerial and underground parts.

The plant material consisted of leaves and roots of the plant Thymelaeahirsuta, which were collected in December 2017 before the period of florescence of the Oued Nini region. Phytochemical screening was carried out according to the study conducted by Tyihák et al., 2008 [4] with some modifications. 25 g of dried plant powder was extracted with n-hexane (in 24 h). The remaining dry plant product was extracted three times with methanol in 40 minutes. The vegetable product residue was then extracted with hot water for 20 minutes.

Preparation of the methanolic extract

50 g of the powder was macerated in 500 mL of 80% methanol. After an incubation period of 48 hours at room temperature, the heterogeneous mixture was filtered by a filter paper and the recovered extract was subjected to evaporation at low pressure at 60 °C with a rotavapor type Heidolph [5]. The extraction yield was the ratio between the amount of extract after evaporation of the solvent in mg and the quantity of the dry powdered plant sample in mg according to Thiaw et al., 2015 [6].

Preparation of the aqueous extract

According to the protocol of Mahmoudi et al., 2013 [7], 50 g of the leaves and roots powders were macerated in 500 mL of distilled water for 15 to 20 minutes with magnetic stirring. The solution was allowed to stand on the hot plate for an additional 15 minutes. After filtration, the recovered extract was subjected to centrifugation and was divided into glass Petri dishes and subjected to freezing; the obtained solution was freeze-dried using a lyophilizer to obtain a powder.

The total polyphenols were tested by the Folin-Ciocalteu colorimetric reagent according to the method referred by Khettaf et al., 2016[8]. A volume of 200 μL of each extract or dilution was mixed with 1 mL Folin-Ciocalteu (diluted 10%). The solutions were mixed and incubated for 4 minutes. After incubation, 800 μL of sodium carbonate solution (7.5%  Na2CO3) was added. The final mixture was shaken and then incubated for 2 h at room temperature. Thus, the absorbance of the resulting blue color was measured at 765 nm using a 1650PC UV-Vis spectrophotometer. The experiments were repeated in triplicate and the results were reported on a standard curve and expressed in equal micrograms of gallic acid per milligram of the extract (μg GAE/mg).

[9, 10] was used to quantify the flavonoids in the extracts. The main reason for choosing this class of polyphenols lied in the fact that flavonoids are the most important polyphenols class, with more than 5000 compounds already written [11].

1 mL of each sample and standard (prepared in methanol) was added to 1 mL of the AlCl3 solution (2% dissolved in methanol). After 10 minutes incubation at room temperature, the absorbance was measured at 430 nm. The quantification of flavonoids was established as the function of a linear calibration curve (y = ax + b) performed by a quercetin standard at different concentrations under the same conditions as the sample. The results were expressed in micrograms of quercetin equivalent per milligram of extract (μg QE / mg).

According to the protocol of Gómez-Caravaca et al., 2006 [12], the DPPH solution was prepared by solubilizing 4 mg of DPPH in 100 mL of methanol. 50 μL of the solutions of phenolic or standard extracts were added to 2 mL of DPPH. The mixture was left in the dark for 1 hour and the discoloration compared to the negative control, containing only the DPPH solution was measured at 517 nm.The positive control was represented by an ascorbic acid solution as a standard antioxidant.The evaluation of the anti-radical activity using the DPPH method was expressed as a percentage according to the following relation:

IC50 was calculated as the extract concentration, causing a 50% inhibition of DPPH radical; a low IC50 value corresponded to the high antioxidant activity of the sample.

Statistical analysis: The results of in vitro determination of polyphenols, as well as flavonoids, were expressed as mean ± standard deviation using Excel 2010 program.

The experimental results of the phytochemical tests, carried out on the two parts of Thymelaea hirsuta from the Oued Nini region, showed the presence of the same degree of aglycone flavones, sterols and triterpenes, polyuronides, coumarins, tannins, and alkaloids, as well as the same degree of the absence of anthocyanosides. The only difference was in the saponosides, which were persistent, stable, and visible foams of 0.7 cm in the roots compared to that of the leaves (0.4 cm).

The yield of the methanolic extract, obtained from the aerial part, was higher compared to that of the underground part, while the yield obtained from the aqueous extract of the roots was higher than that of the leaves (Table 1). So the extraction technique is a very important step in the isolation and recovery of existing phytochemicals in plant material [13]. Similar results were obtained by Belkhiri et al., 2017 [14], who showed that the yield values of Thymelaea hirsuta extract varied between (8 ± 0.3)% and (10 ± 0.7)%, in which the lowest and highest yields were found in the ethyl acetate and methanolic extracts, respectively.

Table 2 shows that the total phenol concentrations of Thymelaea hirsuta from the methanolic leaf extract (68.176 μg EAG/mg) were lower than those from the roots (149.5015 μg EAG/mg). This indicates that the roots are very rich in polyphenols over the leaves using methanol as the extraction solvent.

The results obtained during this study indicated that the total phenolic content of the methanolic extract of T. hirsuta leaves (68,176 μg EAG/mg) was similar to those of aqueous extract (70,2115 μg EAG/mg). Indeed, according to the table 2, the flavonoid content of methanolic or aqueous root extracts (7.745 and 6.240 μg EAG/mg) was lower than that of leaves (20.588 and 9.15 μg EAG/mg). This indicates that the leaves of T. hirsuta have more flavonoid contents than roots.

It is important to note that the method used (choice of solvents) and the conditions under which the extraction is carried out all affect the total content of phenols and flavonoids and thus affect the biological activities mediated by these metabolites[15-17].

Figure 1a shows that DPPH radical scavenging activity was highest by methanolic extract in the two studied parts of Thymelaea hirsuta. DPPH is one of the most important tests used to estimate antioxidant activity. In this test, we observed all the tested extracts in yellow, proving that these extracts gave a hydrogen atom to the DPPH compound.

Figures 1a and 1b show that the antiradical activity is highly dependent on the concentrations of the extracts. The more concentrated the extract, the higher the percentage of activity; the highest inhibitory level of DPPH was recorded at a concentration of 10 mg/mL in all extracts, ranging from 25% to 88%.

According to figure 1c, the inhibition percentages of the methanolic and aqueous extracts of the two studied parts (aerial and underground) were lower than that of the standard antioxidant (ascorbic acid). The antiradical activity of the extracts is relatively dependent on the content of total polyphenols and flavonoids [18]. Indeed, Merzoukireported that the total polyphenol concentration is much correlated with the antioxidant capacity, typically evaluated by the DPPH test[19]. Several factors influence the antioxidant potential and reduction kinetics, including reaction conditions (time, antioxidant ratio/DPPH, type of solvent, and pH) and phenolic profile in particular [20-21]. 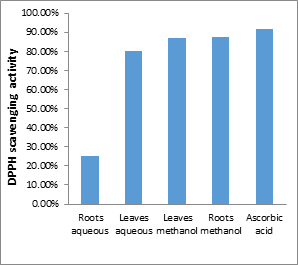 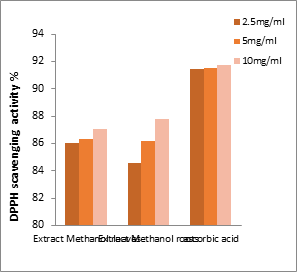 Figure 1b:Free radical scavenging activity of ascorbic acid and the methanolic extracts of roots and leaves 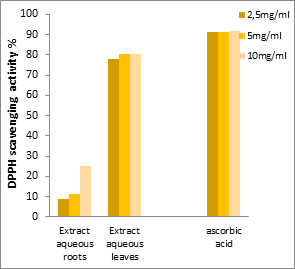 Figure 1c:Free radical scavenging activity of ascorbic acid and the aqueous extracts of roots and leaves

The antibiotics used as a positive control were as follows: Cefotaxime, Tannic Acid, Ampicillin, Nitrofurantoin, Penicillin, Oxacillin, Fosfomycin, and Fusidic acid, and the antibiogram was performed on three reference strains of bacteria against the 8 antibiotics of different families. Measuring the diameter in mm of the inhibition zones of each strain for each of the antibiotics made it possible to characterize the resistance or susceptibility of the strains (Table 4).

Table 5 shows that the seven tested strains were sensitive to all concentrations of methanolic extracts, characterized by the diameters of inhibition zones, which varied between 7 and 12 mm, whereas the clinical strain Escherichia coli BLAS + was resistant to the concentration of 4 mg/mL. While the six tested strains were resistant to all concentrations of the aqueous extract; with the exception of the reference strain, Pseudomonas aeruginosa (ATTC 27853) which was sensitive to the increasing concentrations of the aqueous extract (8 and 24 mg/mL) with inhibition zone diameters of 6.5 and 10 mm, respectively.

It could be concluded from the results obtained in this study that the variation of the antimicrobial activity of the extracts explains the variation of their chemical compositions. Our Thymelaeahirsuta extracts from both studied parts were found to contain a significant amount of flavonoids, so it can be said that the antibacterial activity of these extracts is due to the presence of this type of active chemical compounds in their composition.

Most Mediterranean countries have large plant biodiversity, which remains to be discovered and much of this flora is made up of medicinal species. In conclusion, the quantitative evaluation revealed the presence of significant amounts of the total polyphenols in the methanolic extract of the roots, whereas, in the aqueous extract, the leaves were rich in polyphenols. The aerial part had a very significant antioxidant power than the roots. This antiradical activity of the extracts relatively depends on the content of total polyphenols and flavonoids. Thus, this plant can be considered as a potential natural source of antioxidant and antimicrobial drugs. It is particularly important in combating the recent trend in the emergence of multiple drug-resistant organisms.

We thank all the staff of the Laboratory of  Bacteriology of  Establishment Public Hospital Ain Fakroun for their cooperation and valuable assistance.

The author declares that he has no conflict of interest.