A xanthine-oxidoreductase enzyme is responsible for purine metabolism in our body; converting purine to its end product in the form of uric acid. Inhibition of this enzyme will then reduce uric acid in gout patients, however, it could have some side effects on other tissues and organs. The present study aims to identify the effect of long-term use of allopurinol in modulating the thyroid function in a patient with urate-type renal stone. The result revealed that allopurinol reduced the levels of free form of thyroid hormone and elevate TSH level with no effect reported with the bound thyroid hormones; these results were confirmed by ultrasonography results obtained for the patient before and after allopurinol therapy showing enlarged thyroid gland, change in echogenicity, and increased blood supply with nodule formation in few of them. These study has concluded that allopurinol could induce a state of subclinical hypothyroidism‎.

Structurally, allopurinol is a purine analog compound and is described as a first-line uricosuric agent for the treatment of hyperuricemia and gout reducing the recurrence of gout attacks and decreasing the amount of monovalent sodium urate concentration which could lead to tissue injury, crystals and inflammation [1-4]. Gout is a common disease and is associated with a high rate of morbidity, resulting in a greater increase in allopurinol use [5, 6]. A new anti-gout medication has been recently introduced in clinical practice (benzbromarone, lesinurad, and probenecid), however, these medications are less popular in comparison to allopurinol [7]. The

hypouricaemic effects of allopurinol have been limited by renal impairment which is common in gout patients, however, other uricosuric agents have more deleterious side effects particularly hepatic toxicity associated with benzbromarone; which led to its withdrawal from the markets [8]. Elevated thyroid-stimulating hormone (TSH) level in a febuxostat-treated patient has been reported after long term therapy [9, 10]. Therefore, the febuxostat medication leaflets carry a caution of avoidance in thyroid disease patients, however, there is only limited data regarding the negative impact of allopurinol in thyroid patients. Therefore this study was designed to determine the effect of long-term allopurinol use on the thyroid gland in comparison to baseline (before allopurinol therapy) and healthy patients using ultrasonography and analytical test for diagnosis. Unfortunately, limitation of the number of patients with active urate stone and poor patient adherence to therapy has hampered the progress of the study leading to the enrollment of only limited numbers of patients in the study.

A total of 15 renal stone (9 male and 6 female) patients were enrolled in this study, they were treated with allopurinol therapy for 6 months. Another group involved twenty-two healthy volunteers (14 male and 8 female), were also enrolled in the study as a control group for comparison. The demographic parameters were mentioned in Table 1 below. A consent form of agreement has been taken from all subjects.

The study design was a case-control study and the patients were excluded from it if they had a history of any chronic disease (including, thyroid disease, hypertension, angina pectoris, myocardial infarction, heart failure, renal or hepatic insufficiency or those taking any chronic medication; particularly amiodarone. Pregnant women and lactating mothers were also excluded from the study.

NSNon significant differences as compared to the same parameter in the control group (P > 0.05).

Its recommended by the European Medicine Agency to avoid using allopurinol in patients with thyroid disease due to occasional investigation of elevated TSH in febuxostat and allopurinol treated patients [2, 11], however, no further studies is determining the long term use of allopurinol on the peripheral thyroid parameter including the levels of free form. Hereby, we aimed to identify the effect of long-term use of allopurinol on the peripheral thyroid hormone axis as a function of measuring the level of free and bound thyroid hormones together with TSH; the importance of this study is due to the coincidence of thyroid abnormalities and impaired uric acid metabolism together with the fatal cardiovascular disease.

In presence of small scale evidence of the impact of inhibition of xanthine oxidoreductase on thyroid function by febuxostat; in the line with that allopurinol could carry such deleterious or protective effects on thyroid gland [7]. A retrospective and prospective study reported elevated TSH levels in hyperuricaemic patients on uricosuric agents [8]. Moreover, a concomitant association between hyperuricaemic and hypothyroidism has been demonstrated; allopurinol could be an overt causative agent in the enrolled subjects in the study [9, 12].  In the present study, we found out that allopurinol has induced a significant (p<0.001) reduction in the level of the free forms of thyroid hormones [(fT3=1.5±0.6), (fT4=8.3±1) pmol/l] with no changes in the level of the bound form [(T3=1.5±0.7), (T4=8.3±1.1) nmol/l] confirmed by elevated TSH levels [(TSH=6.2±0.6)mIU/l] (Figure 1); the present finding were confirmed by ultrasonography parameters which shows an impairment of thyroid tissues structure, shape, size, and echogenicity (Figure 2). Nevertheless, this finding is controversial due to the association between overt hypothyroidism and hyperuricemia in allopurinol negative patients [13, 14]. The present study shows that increased blood flows to both thyroid gland lobes in hyperuricaemic patients even before the association of allopurinol therapy (Table 2). The demographic character between the control and patients was acceptably matched; to avoid any mismatching between age and BMI (Table 1). The duration of treatment of allopurinol was 6 months and the dose was 300mg/day.

In the present study; the elevated TSH levels were associated with a reduction in free form of thyroid levels and there were no obvious changes in the bound form, these sign and symptoms are attributable to the subclinical hypothyroidism; these results were in agreement with a study done on dog treated by allopurinol resulting in increased TSH levels with no change inbound form of T4 and T3 hormone levels  [13, 14], confirmed by data obtained from ultrasonography parameters (Figure 2 and Table 2). 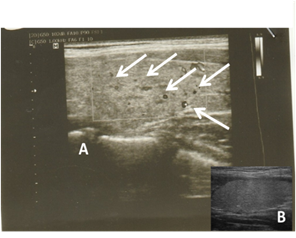 Figure 2. a representative ultrasonogram of patient before (B) allopurinol and after (A) allopurinol indicating the presence of nodules (arrows) in allopurinol-treated in comparison to baseline (See also table 2).

Nevertheless, a study conducted on the role of therapeutic intervention on thyroid hormones showed a negative correlation between fT4 and TSH [15-18]. To sum up; the present study observed an increase in TSH, fT3, and fT4 levels, with no changes associated with T4 and T3 levels or clinical manifestations apart from ultrasonography parameter changes. Its recommended to identify the correlation between TSH (and subsequently downstream thyroid axis) therefore further studies are needed.

Long-term use of allopurinol induced an elevated level of TSH, however, there is no alteration in the levels of the bound thyroid hormones with a reduction in free form. These results could suggest that long-term use of Allopurinol may lead to subclinical hypothyroidism and such patients may require annual screening of their thyroid function particularly in endemic countries with goiter and their bound thyroid hormone levels do not predict the risk.

The authors are very grateful to the University of Mosul/College of Medicine and College of Pharmacy for their provided facilities, which helped to improve the quality of this work. They also thank the scientific committee in the department of pharmacology and toxicology of the college of the pharmacy/University of Mosul.