1- Increased sensitivity for detecting tumors [3-6], 2- Improved detecting of involved lymph nodes [6-8], 3- Evaluation of response to chemotherapy or radiotherapy and differentiation of fibrosis from viable tumoral tissue after treatment [5, 9-12], 4- Prediction of response to chemotherapy or radiotherapy [13] and 5- better depicting of mesorectal fascia clearance from tumor after chemotherapy or radiotherapy [14]. Susceptibility artifact on MRI images has been defined as localized distortion of image signal or signal loss in areas where magnetization is changed significantly. Susceptibility artifact is mostly seen at air-tissue, bone-tissue, and metal-tissue interfaces [15]. The main artifact on rectal DWI sequence is susceptibility artifact due to air in rectum, that in 16 percent of patients it could make imaging uninterpretable [10]. To decrease this artifact, two solutions have been present, first is the alteration of DWI parameters and the second one is the elimination of the cause of artifact (air in rectum) [10]. Many studies have worked on changing the parameters of DWI sequence such as decreased field of view [16], parallel imaging  or bipolar DWI imaging [17, 18]. Some studies have focused on replacing rectal air by enema. In almost all of these studies, enema by ultrasound gel has been done [1, 10]. Rectal distension could compress the rectal mucosa, and change the distance between tumor and mesorectal fascia [19]. A new research published on 2018 concluded that endorectal filling with ultrasound gel before MRI did not result in improved T-staging, and could falsely increase T-stage of tumor due to the pressure effect on mesorectal fat [20]. In this study and some other studies, it was concluded that MRI without enema led to more precise T-staging [20, 21]. In one study, it was offered that enema with 5 cc Microlax could significantly decrease susceptibility artifact on DWI sequence without distension of rectum [10]. We designed a study to compare the change of susceptibility artifact on DWI sequence after ultrasound gel enema with this change after enema with Microlax. Also, the extent of rectal distension after enema with ultrasound gel was compared with this distension after enema with Microlax. After these comparisons, the authors wanted to know which enema would result in better DWI images and lesser extension of rectum.

Ethics: Each patient was informed about the whole process of study and signed the consent form.

Also, this study did not have any side effects on patients.

The study started in January 2018 and ended in January 2019. We collected 40 patients with known rectal cancer were the participants. All patients referred to the MRI center for primary staging or restaging (after treatment). The MRI machine was 1.5 Tesla, Ingenia, Philips (model of Omega).

For each patient before applying enema T2-weighted sequence, T1-weighted sequence without and with Gadolinium IV injection, DWI and ADC map were acquired (each patient had GFR more than 60 cc/min/1.73 m2 and was suitable for IV injection of Gadolinium). After enema, only T2 and DWI sequences and ADC map were obtained. Parameters of MRI sequences after enema were the same as the counterpart sequences before enema. For DWI sequence, b-value was 1000 s/mm2. The thickness of each axial slice was 4 mm for DWI sequence.

For 20 patients, enema with Microlax, and for other 20 patients enema with ultrasound gel was done. MICROLAX® is a micro-enema which softens the stool for treatment of constipation. The amount of ultrasound gel or Microlax used for enema was 60 cc. Enema was applied 5 to 10 minutes before MRI acquisition. The compliance of patients for applying 60 cc enema was perfect, and no patient rejected receiving enema.

Ultrasound gel enema was compared versus Microlax enema regarding their effect on two variables: 1) susceptibility artifact on DWI sequence and 2) rectal distension. For susceptibility artifact, two radiologists with expertise in interpretation of pelvic MRI subjectively gave a score to DWI images of each patient before enema and a score for after enema DWI images. The two radiologists agreed on a consensus for subjective scoring system used 6 scores to depict the extent of susceptibility artifact on DWI images (0 for no artifact, 1 for mild, 2 for mild to moderate, 3 for moderate, 4 for moderate to severe and 5 for severe artifact) (Figure 3). Each patient was given two scores by each radiologist, one score for DWI images before enema, and another score for after enema. The averages of two scores for before enema images and two scores for after enema images given by two radiologists for each patient were calculated, and the final scores were considered for data analysis.

Regarding rectal distension by enema, the volume inside rectal lumen was calculated between upper and lower borders of cancer. On axial images of T2 sequence, from lower up to upper borders of cancer , the area of lumen at each slice was calculated (by the software of MRI workstation), then these numbers were summed, and the summed number was multiplied by 0.15 cm (thickness of each slice). The final number was the approximate volume inside rectal lumen in unit of cm 3. For each patient, this volume was calculated before and after the enema.

Score equal to or more than 3 (for DWI susceptibility artifact) was considered clinically important because of hampering correct interpretation of images.

Also, the numbers of score 3 or more on DWI images before and after the enema were compared between group 1 and group 2.

In addition, the volumes inside rectal lumen between the upper and lower parts of cancer before the enema between patients of group 1 and 2 were compared, then this volume was compared before the enema with this volume after the enema for each group. Lastly, the extent of increased volume of this space after enema (in comparison to before enema images) was compared between the patients of group 1 and 2. 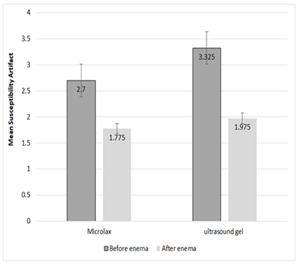 Figure 1. Mean Susceptibility artifact before and after enema with Microlax and ultrasound gel 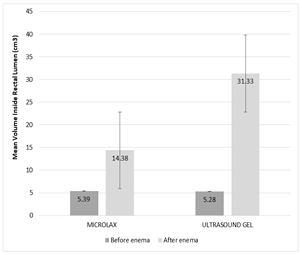 Figure 2. Mean Volume inside rectal lumen before and after enema with Microlax and ultrasound gel

Mean volume inside rectal lumen between upper and lower borders of cancer before microlax enema in group 1 was the same as this volume before ultrasound gel enema in group 2 (P-value: 0.771). This volume increased significantly after enema with Microlax (14.38±5.352 cm3) and ultrasound gel (31.33±9.494 cm3) versus before enema volume for microlax group (5.39±1.427 cm3) and ultrasound gel group (5.28±0.891 cm3); respectively (P-value<0.001 for each group). Increase of mean volume inside rectal lumen after ultrasound gel was more than Microlax enema (in comparison to before enema volumes) (P-value<0.001).

Lastly, the authors considered the effect of four potential confounders: Age, gender, BMI and existence or absence of constipation on susceptibility artifact and volume inside rectal lumen. All four confounders had no effect on these variables in each group or between two groups. 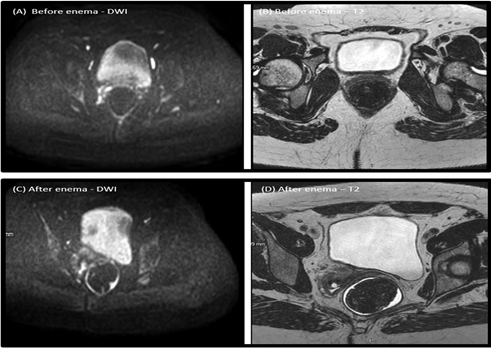 Figure 4. DWI and T2 sequences before enema (A and B) and after enema (C and D)

MRI is used more for rectal cancer staging, and DWI sequence is becoming a part of routine sequences. Different methods have been applied to improve the quality of DWI images [8]. Many studies have worked on changing the parameters of DWI sequence such as decreased field of view [16], parallel imaging [17] or bipolar DWI imaging [18]. Some studies have shown that rectal enema could improve the quality of DWI images. In almost all studies on enema, the substance for enema was ultrasound gel, and the amount of enema was 50 to 150 cc [10]. A study by Slater et al., (2006) showed that the distance of outer rectal wall to the mesorectal fascia decreased after 100 cc room air insufflation to the rectum [19]. The extent of cancer invasion beyond muscularis propria has been determinative for rectal staging [22]. Also, the distance between tumor and mesorectal fascia has been crucial for cancer prognosis [23]. If the distance between tumor and mesorectal fascia (MRF) is more than 1 mm, MRF is considered clear from cancer, and this is suggestive of negative margins after TME (total mesorectal excision) [24]. One study has shown that endorectal filling could lead to overstaging of rectal cancer on T2 sequence due to pressure effect on mesorectal fat [20]. To overcome this obstacle, Griethuysen et al. (2018) used micro enema with 5 cc Microlax before DWI sequence, and their results showed the decrease of susceptibility artifact after micro enema versus without enema DWI images [10]. In this study, the authors applied 60 cc enema for each patient. In both groups, (Microlax and ultrasound gel) susceptibility artifact decreased significantly. When the susceptibility artifact after enema  was compared between two groups, there was no statistical difference. Therefore, the authors concluded that the decrease of susceptibility artifact by Microlax was the same as ultrasound gel enema.  Because the authors applied 60 cc enema, enema material in all slices of MRI images was seen. Therefore, the susceptibility artifact on DWI sequence in all slices was decreased. In the study done by Griethuysen et al. (2018), the amount of Microlax enema was 5 cc [10]. The authors thought 5 cc enema was too little specially for cancers lying at high part of rectum, and 5 cc could not decrease the susceptibility artifact in all slices. Also, the authors found that the volume inside rectal lumen after enema was increased significantly in comparison to this volume before enema either by Microlax or by ultrasound gel. Increased volume after enema with Ultrasound gel was more than Microlax. As mentioned before the enema material could alter the distance between tumor and mesorectal fascia and compress mesorectal fat, and therefore could change T-stage [19, 20].

The authors would offer enema with about 60 cc Microlax before DWI sequence of rectal MRI because this decreased the susceptibility artifact on DWI and other sequences, and because the rectal distension caused by Microlax was less than Ultrasound gel, so T-staging with Microlax was more precise.

One of the limitations was that for every patient 60 cc enema was used. The authors thought that if a similar study would be done using different amounts of enema according to the location of cancer (high, middle or low in rectum), the results would be more precise. In addition, if a study would be designed to compare rectal staging based on MRI after Microlax enema with staging based on pathology, the authors could decide better whether to use Microlax enema before MRI or not.

There were not any conflicts of interest between the authors.

MF contributed in the conception of study, collecting patients, reporting all MRI images, analysis of MRI images, approving final version of manuscript and MF agreed with all parts of final manuscript.

FR contributed in gathering patients, analysis of MRI images, approval of final version of manuscript, and FR agreed with all parts of the final manuscript.

MK contributed in drafting the study and revising the final version of manuscript, and MK agreed with all parts of the final manuscript.