The effects of Phentermine and Lorcaserin on body weight, food intake, and visceral fat in Mice: comparative study ‎

Overweight/obesity is a common problem in the modern age. Dieting and exercise alone may be inefficient in losing weight and maintaining a healthy risk-free weight goal. Modern lifestyle and inappropriate food intake (in quantity and quality) are the main factors to blame [1]. However, weight loss achieved by lifestyle modifications alone is often limited and difficult to maintain. Increased energy expenditure and reduced caloric intake are neutralized by adaptive physiologic responses [2]. Anti-obesity pharmacotherapy is one strategy to offset the adaptive changes in appetite and energy expenditure that occur with weight loss and to improve adherence to lifestyle interventions [3]. Medication for obesity can be considered if patients have a body mass index (BMI) of >30 kg/m2, or >27 kg/m2 with weight-related comorbidities, such as hypertension, dyslipidemia, obstructive sleep apnea, and type 2 diabetes [4, 5]. Since obesity is a chronic disease, most antiobesity medications have been approved for long-term treatment. Until a few years ago, orlistat and phentermine (and other sympathomimetic amines) were the only FDA-approved antiobesity drugs. In 2012, phentermine/topiramate extended-release (ER) and lorcaserin were approved; in 2014, naltrexone sustained-release (SR)/bupropion SR and liraglutide 3.0 mg were approved [6].

Phentermine is an adrenergic agonist that increases resting energy expenditure and suppresses appetite. Phentermine is indicated for using in a short-term (three months), as there are no long-term safety trials of phentermine monotherapy; but it was approved in combination with topiramate ER for long-term therapy. Many physicians prescribe phentermine for more than three months as an off-label therapy for continuous management of weight. In 2012, the FDA approved phentermine/topiramate ER for chronic management of weight as an adjunct to increased physical activity and decreased-calorie diet. The rationale for a combination medication is that appetite regulation involves multiple pathways, so targeting different mechanisms simultaneously can have an additive impact on body weight [7].

Lorcaserin, selective serotonin (5-hydroxytryptamine [5HT])-2C receptor agonist, was approved by the FDA in 2012 as a long-term treatment of obesity. Lorcaserin reduces appetite and increases satiety by binding to the 5HT-2C receptors on anorexigenic pro-opiomelanocortin (POMC) neurons in the hypothalamus. Lorcaserin was designed to avoid cardiac valvular effects mediated through the 5HT-2B receptor because of its selective agonism of the serotonin 2C receptor [8]. Due to the possible abuse of both drugs by non-eligible candidates for accelerated weight loss, the current study was designed to examine and compare the effects of drugs in healthy non-obese mice over different durations.

Preparing and Administering the Required Dose:

The drug tablet was pulverized using a Mortar Grinder (Retsch® RM 200, Germany) then emulsified by Tween 80 and diluted with distilled water. The dose was calculated for each animal and was given orally by oral gavage using a flexible oral feeding needle. The animal dose was calculated depending on the body surface area equations in equivalence to human approved dose [9].

The animals were kept in individual cages for one week before the drug treatment to adapt to lab conditions and allow for daily food intake estimation. Once treatment began, they were weighed daily and provided with 10 grams/day of regular rodent chow (Teklad® 4% Fat Mouse/Rat Diet, Harlan Laboratories, Seoul-Korea). At 8:00 AM every morning, the remaining food pellets were collected and weighed to calculate food intake. Each animal was weighed daily, and at the end of the week, the amount of weight loss was calculated [10].

At the end of the treatment duration for each group, mice were sacrificed under anesthesia and the right epididymal visceral fat pad was dissected, weighed, and prepared for histological examination to study changes in visceral fat tissue. Histological sections of 5πm thickness were stained with H&E and examined using a light microscope with a built-in camera (Leica® DM4000 B LED). Five fields were examined in each slide and the diameter of adipocytes was measured using Image-J software after digital image scaling.

Using the analysis of variance (SPSS Software, version 20.0), the results were statistically analyzed, and whenever there was a difference between the correlated groups, student’s t-test was performed to estimate the significance degree by comparing the mean of data and standard deviation of each group. Therefore, data are presented as mean ± standard deviation, at a 95% confidence interval (P ≥ 0.05). 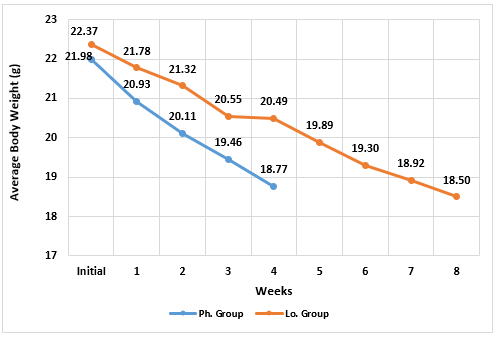 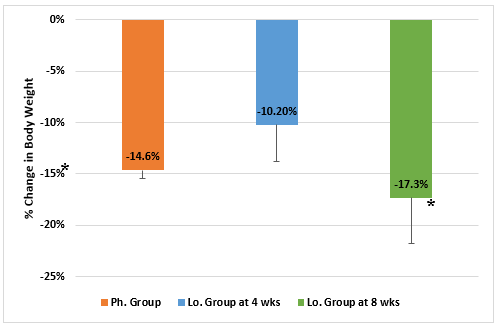 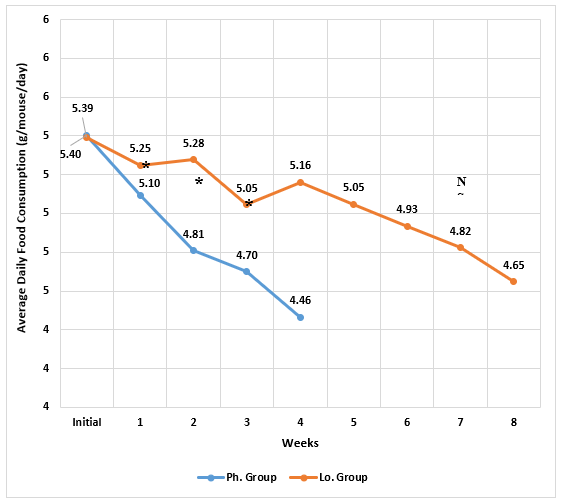 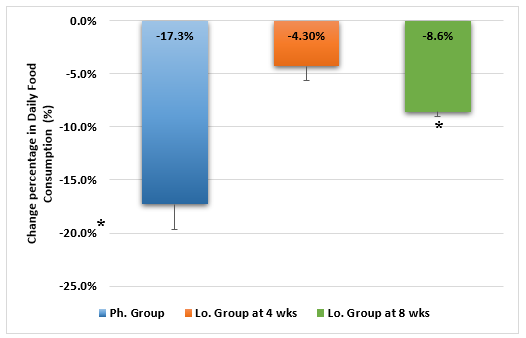 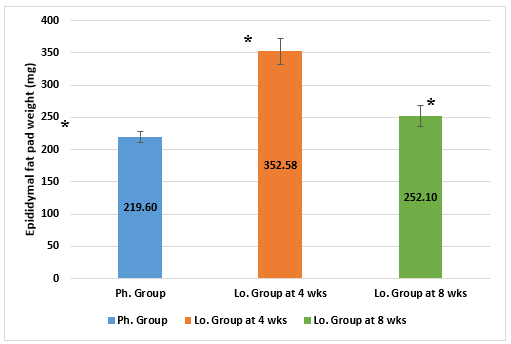 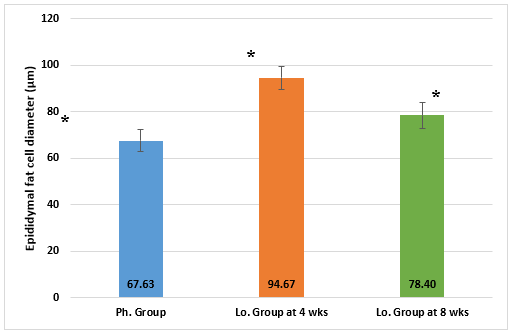 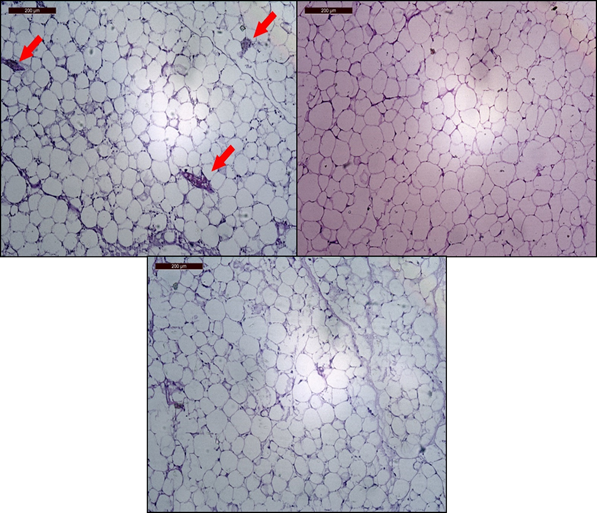 Although the cornerstone of weight loss is caloric restriction and increased energy expenditure, it is commonly seen now that these measures alone are not enough to maintain a healthy weight and pharmacologic aid has become increasingly used to achieve such a goal. Phentermine and lorcaserin are two commonly used drugs for such purposes [11]. The current study showed that both drugs can lower food intake and body weight, but the effects achieved by phentermine over the short term exceed the effects of lorcaserin over the same period but maybe as equivalent when lorcaserin is used in a long term. Phentermine (when used alone) is a noradrenergic sympathomimetic drug that acts centrally to suppress appetite by up-regulating certain messenger activities like serotonin, noradrenaline, and dopamine [12]. Some researchers proposed that it might also increase energy expenditure by hypothalamic stimulation of the sympathetic autonomic nervous system [13]. The problem with using phentermine alone is its potential cardiovascular adverse effects such as palpitations, tachycardia, and hypertension and on long-term possible valvular heart disease and pulmonary hypertension [14]. The introduction of the phentermine/topiramate combination allowed a greater amount of weight loss over a shorter period, which in turn reduced the incidence of cardiovascular and neurological side effects [15]. The current study used phentermine monotherapy since it was only used for a short period.

Unlike phentermine, there are few papers in the literature reporting the actions of lorcaserin in pre-clinical models of obesity and feeding [16], and the forewarning to its approval required the need to perform post-marketing studies [17]. Lorcaserin is a 5-hydroxytryptamine (5-HT2C) agonist with a high affinity that stimulates 5-HT2C receptors on the pro-opiomelanocortin (POMC) neurons in the arcuate nucleus of the hypothalamus; this leads to the release of an alpha-melanocortin-stimulating hormone (alpha-MSH) that acts on melanocortin-4 receptors in the paraventricular nucleus to suppress appetite [18]. Lorcaserin is indicated in combination with increased physical activity and decreased-calorie diet for chronic weight management in obesity since short-term use of high doses can cause 5-HT2C-related neurological side effects [19]. Although lorcaserin-related neuronal networks can affect energy balance [20], there is no confirmed evidence of such an effect of the drug. This may explain the doubled duration lorcaserin needed to achieve weight loss compared to phentermine in the current study since phentermine has a double mode of action. It may also explain the dose-related increase in food consumption after a few weeks of use, possibly due to physiological receptor down-regulation.

The study used epididymal fat as a depot of visceral fat in reference to subcutaneous fat due to histo-physiological properties of visceral fat in terms of weight loss. Visceral fat is more susceptible to fat depot loss because it is more metabolically active than subcutaneous fat possibly due to more cellularity, greater vascularization, more innervation, and greater susceptibility to certain hormones [21]. This is supported by the result of engorged blood vessels in Ph. group fat pads due to the high circulation of lost fats to the circulation. The presence of clear connective tissue septa also reflects the reduction in adipocyte size hindering the cells from abutting each other and the septa [22].

Phentermine can change body weight and visceral fat in half the time of that of lorcaserin but the final maintained results and lesser adverse effects may be in favor of lorcaserin. The combination of the two drugs may offer a better understanding of their combined work and requires further study.

All authors declare that there is no conflict of interest among the authors.