Division of CCA and orientation of external carotid artery (ECA) branches are essential for diagnosis and surgical procedure in neck. The origin of the CCA is different on both sides [1]. CCA is a branch of the brachiocephalic trunk on the right side and arch of the aorta on the left side which arises adjacent to the posterior part of the sternoclavicular joint [2]. It divides into the external and internal carotid artery on the superior border of thyroid cartilage, at the level of intervertebral disc of C3 and C4 cervical vertebrae [3]. The ECA supplies the facial structures, exterior region of the scalp, greater part of neck and superior pole of thyroid while, internal carotid artery (ICA) supplies the cranial and orbital cavities [4]. The cervical portions of the CCA resemble each other  in a way that, each vessel ascends the sternoclavicular joint posteriorly to the level of the intervertebral disc of C3 and C4, where it bifurcates. The CCAs are separated from each other by the trachea and thyroid gland, larynx and pharynx. At the site of bifurcation, the ICA usually takes a deeper path and is posterolateral to the ECA that gives off no branches in the cervical region, whereas the external does. This study reports unilateral variations in the bifurcation of CCA [5].

This case is reported for unusual division of CCA and branching pattern of ECA on the left side of the cadaver. During dissection of the left and right CCAs, in the Department of Anatomy, Ilam University of Medical Sciences, we found unilateral variation on the bifurcation of CCA in a 28-year-old male cadaver. The dissection of the cadaver was carried out according to the Cunningham’s manual of practical anatomy after fixation with 4% formalin. The skin was exposed from the chin to the suprasternal notch. On both sides the CCA was then exposed as were the branches of the ECA. The rCCA arose from the brachiocephalic trunk in proximity of the sternoclavicular joint as was expected and then it crossed the neck and ascended along its course within the carotid sheath where the internal jugular vein and vagus nerve is located lateral and posterior to it, respectively (fig1). 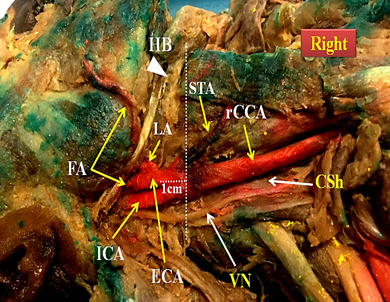 On right side, the level of division of CCA was correlated with 1cm from the superior margin of thyroid cartilage. After bifurcation, the right superior thyroid artery arose from the anterior surface of ECA and passed the superior border of thyroid gland directly. The right facial artery and lingual artery arose from the anterior of ECA just lower and above the angle of the mandible, respectively. The right facial artery coursed along the posterior border of the mandibular ramus and superficial portion of submandibular gland, and then gave off muscular branches to facial muscles. 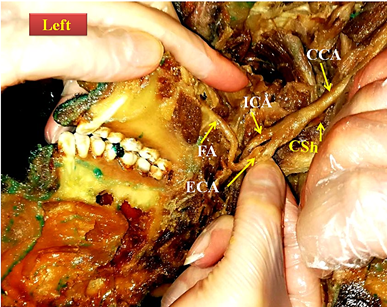 The left CCA (lCCA) originated from the arch of the aorta, subsequently passes through the posterior part of the sternoclavicular joint. After entering the neck, the artery lied within the medial part of the carotid sheath. The rCCA and lCCA gave off no branches proximal to  their divisions. In the present study, unilateral variation in the bifurcation levels of lCCA was detected. The bifurcation of the lCCA was at the levels of the upper and behind of the angle of the mandible and 4cm upper to thyroid cartilage. The left ECA approximately 2 cm above the level of bifurcation is divided into two arteries, first branch is the facial artery that has variation on its origin and course. The second branch ascends to the infra temporal fossa and divides into maxillary and superficial temporal arteries. On the left side the superior thyroid, lingual, occipital and posterior auricular arteries were absent. These branches  were normal on the right side. 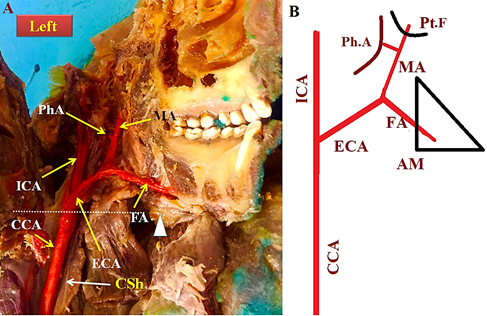 The ventral segment and aortic sac opposite the 3rd arch is the fetal origin of CCA. The dorsal portion of the 3rd arch artery and the dorsal segment of the aortic arch form ICA. The ECA is also derived from the sprouts of the aortic sac adjacent of the ventral segment of the third arch. The outgrowth of the sprout from a higher point leads to the division of the artery in the higher level [6]. The unilateral and bilateral variation in the bifurcation of CCA is not common; Patil et al. (2012) showed variation of bifurcation of CCA on the right side 4.2 cm and on left side 3.5 cm just behind the angle of the mandible and at the higher level [1]. In another case report Deshpande et al. (2015) showed that multiple variations in the CCA bifurcation level, tortuous ICA and ECA and the number of branches arising from ECA. The state of arrangement of an artery in the face may lead to loop formation outside of the pharyngeal wall which is known as the “dangerous loop.” These variations are pivotal for surgeons and radiologists in case of cutaneous carotid angiography [7]. If the CCA bifurcation occurs at a higher level in that case, the hypoglossal nerve will be in relation to the CCA. Smith and Larsen (1979) reported that the CCA bifurcation at higher than normal levels, occurs more commonly on the left side [8]. These findings are in agreement with this case report. In the present case we found unilateral higher division of lCCA, and the absent of the left superior thyroid artery and lingual artery. The anatomic consequences of such variations of the CCA birfurcation have been one of the risks of rupture of the artery during the vascular surgical procedures for carotid endoplasty, extracranial–intracranial arterial bypass, ear and throat surgeries that lead to surgical complications [9]; hence, surgeons and radiologists should be aware of these types of variations to prevent the rupture or bleeding caused by damage to the artery in an unusual position. A high CCA bifurcation is at a higher risk of encroachment by intra-articular torsion during procedures on the neck and face, and they are associated with higher occurrence of vascular rupture [10].