Drugs included in the category of biological products, which are ingredients or alloys of materials, used to influence or investigate physiological systems or pathological conditions in the context of establishing the diagnosis, prevention, healing, recovery, and improvement of health, and contraception for humans [1]. By definition, patent medicines or innovator drugs are newly discovered drugs based on research and have a patent period that depends on the type of drug. According to Law No. 14 of 2001, the validity period of patents in Indonesia is 20 years. During those 20 years, the pharmaceutical company has exclusive rights in Indonesia to produce the said drug. Other companies are not permitted to produce and market similar drugs, except if they have a special agreement with the patent owner.

Copy drugs, branded named drugs, or branded generic drugs are medicines that have expired patent rights, which are produced and marketed under a trading name. This drug will appear when the originator's patent expires. Atorvastatin is a statin derivative, mainly used to lower blood cholesterol, and for prevention related to cardiovascular disease, which is the major causes of mortalities worldwide [3, 4]. Atorvastatin works by inhibiting HMG-CoA reductase, an enzyme found in liver tissue, which plays a key role in the production of cholesterol in the body [5, 6].

Atorvastatin is the fifth drug in the statin class to be developed; clinical trials show that atorvastatin causes a more dramatic decrease in LDL-C than other statin drugs. From 1996 to 2012, under the trade name of innovator products, atorvastatin became the best-selling drug of all time in the world.

Based on the solubility and permeability, atorvastatin is an insoluble compound with high permeability (Biopharmaceutics Classification System Case-2, BCS II) [7]. Dissolution generally becomes the rate-limiting step in BCS II compounds. Dissolution testing is one of the most important quality controls for pharmaceutical preparations, which can be used to predict bioavailability. Dissolution of a drug is directly related to its pharmacological activity because it is a prerequisite for drug absorption and clinical response. The in-vitro dissolution velocity relationship and its bioavailability are formulated in the form of IVIVC (in-vitro in-vivo correlation) [8].

Based on this description, it is necessary to do further research by comparing the dissolution profile of various atorvastatin tablets circulating in Indonesia, because the atorvastatin tablets in circulation must meet the bioequivalence requirements with the atorvastatin innovator tablets to provide the same therapeutic effect. In addition, the existence of a great deal of research and studies on generic drugs will increase the knowledge of public and health workers.

The organoleptic test includes examining the uniformity of color, surface shape, odor, taste, and the presence or absence of physical damage.

A total of 20 tablets, cleaned of dust were weighed one by one, and the average weight was calculated. The percentage value of the deviation and CV were determined in order to obtain variations in the weight of the tablet.

One tablet was placed in the middle and perpendicular to the hardness tester; first in the zero position, then the tool was slowly turned until the tablet broken. The scale achieved was read when the tablet was broken or destroyed [9].

A total of 20 tablets, free from dust were weighed, then put into the friability tester. The tool was run for 4 minutes or 100 times/round. The tablets were taken and cleaned of attached particles, weighed again, the percentage of the difference or decrease in weight was calculated. The total weight of the tested tablets should not be less than 1% of the initial weight of the test [9].

Six tablets were put in a basket-shaped tube, and then the tubes were regularly raised up-and-down 30 times per minute in a water medium at 36-38 °C. The tablets were stated disintegration if no part of the tablet was left above the screen [10].

Standard atorvastatin concentration was made in methanol with 7 levels (absorbance value on the spectrophotometer in the range 0.2-0.8), each absorbance was read at a maximum wavelength of 246 nm, and calibration curves were made [12].

Preliminary tests conducted were physical tests of atorvastatin tablets, both generic preparations and preparations with trade names, which included appearance, weight diversity, fragility, hardness, and disintegration time. The physical properties of tablets must be checked before a product is marketed.

Tablet manufacturing involves a variety of processes in which some problems may arise in each of the processes involved. In addition to the manufacturing process, there are additional materials or components of the tablet, as well as machines or equipment used in producing tablets, which can affect the quality of the produced tablets [14]. The results of the evaluation of the appearance of generic atorvastatin tablets, innovators, and branded showed no disability or physical damage to the tablets.

FThe parameters used for weight uniformity test were based on Pharmacopoeia of Indonesia (1995). The weight uniformity test was intended to determine the diversity of the availability and to ensure that each tablet contains the same amount and dosage of drugs or active ingredients [10]. Deviations can affect the dose of drug ingredients per tablet. As shown in columns A and B, there was no deviation from the weight in the tablets. Moreover, the results of the CV calculation showed that all atorvastatin tablets on the market, and also generic, innovator, and branded atorvastatin met the weight uniformity requirements. CV values in a row on the generic, innovator, and branded atorvastatin tablets were: 1.01%; 1.53%, and 1.87%, respectively. Of the three types of products, different weights were obtained, which may be caused by the implementation and equipment factors, and each product is produced in a variety of weights that meet the requirements using the standard Good Manufacturing Practices.

Tablet preparations should have a certain hardness in order to be able to withstand a variety of mechanical shocks during manufacturing, packaging, and transportation. A good tablet hardness ranges between 4-8 kg [14]. The results showed that the hardness of tablets that met the criteria was atorvastatin generic with a hardness of 7.36 kg, whereas for the atorvastatin innovator tablet with a hardness of 11.24 kg, and atorvastatin branded tablets with a hardness of 11.11 kg, it could be said that they had a high level of violence because of a level of violence above 8 kg. The difference in the hardness between generic products, innovators, and branded products, may also be due to the differences in granulation methods, binders, and lubricants used in the tablet manufacturing process by each manufacturer.

Tablet hardness is not an absolute indicator of its strength. Therefore, another way to measure the strength of tablets is the fragility index that is often determined. From the results of the study, it was found that the fragility index for the three atorvastatin tablets on the market fulfills the requirements because the result was 0%, although the weight loss was smaller than 0.5% to 1%, it can still be justified. The resistance of tablets to mechanical shocks in the production environment is related to a large number of tablets available, the production equipment used, and the skills of production employees [15].

According to USP (2012) for film-coated tablets, each test tablet should completely be destroyed within a maximum of 30 minutes. [16] Of the three types of tablets studied, all of them met the requirement because the destruction time was less than 30 minutes. The longest disintegration time was for atorvastatin generic tablets, and the fastest disintegration time was for the innovator atorvastatin tablet. The results of the crushed time test were inversely proportional to the results of the hardness test, where the highest hardness was for the innovator atorvastatin tablet and the lowest hardness was for generic atorvastatin tablet. Hard tablets tend to take longer to break or disintegrate. This may be influenced by the formulation factors of each producer, density, and the amount of the prepared ingredients, including all added auxiliaries especially the binder (granulation material), as well as the lubricant, size, and shape. 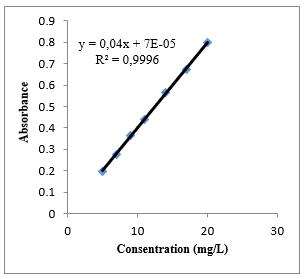 he results of the determination of atorvastatin drug levels for the innovator, branded, and generic tablets met the content requirements, which were not less than 90.0%, or more than 110.0% of the amount stated on the label [19].

In making standard curves, the absorbance was measured at the maximum wavelength, then a linear regression equation was made to determine the value of a linear correlation, and these results indicated a linear relationship between concentration and absorbance. 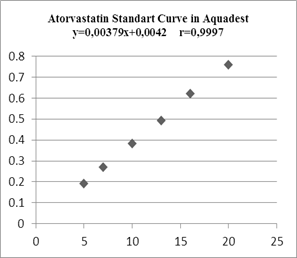 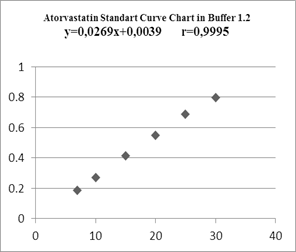 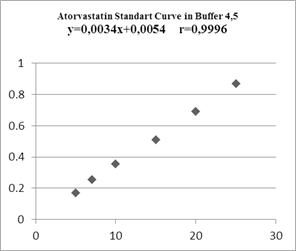 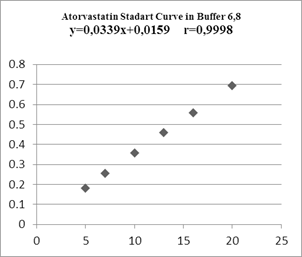 Dissolution test is the process of dissolving active substances (medicinal substances) in a drug preparation into a medium. The tablets will undergo a process of disintegration when the drug contacts with body fluids, namely the destruction of the tablet into a granule, and continued with the destruction of the aggregate into its constituent particles. Dissolution testing has several objectives, namely for optimization of formulas, and routine control after fabrication [14]. The dissolution test results of the three tablet samples were plotted in a graphical form and can be seen in the figure 7,8,9,10. In general, the active ingredient in film-coated tablets has dissolved more than 70% in the 15th minute[19]. Atorvastatin branded and innovator tablets have met these requirements, but generic tablets only reach 70% in the 45th minute. None of the pH 1.2 buffer media was dissolved at 70% in the 15th minute, and only samples of branded atorvastatin tablets reached 70% in the 45th minute. In the buffer medium with pH 4.5 in the 15th minute, the release levels of atorvastatin branded tablets and innovator tablets had reached 70%, whereas for generic tablets it did not reach 70%, even though it was at the end of testing in the 45th minute. On buffer media with pH 6.8, the levels of sample of branded atorvastatin tablets and innovator tablets reached 70%, which were released in the 15th minute; while for generic tablets, 70% was released in the 25th minute. There are many factors that cause differences in dissolution profiles between innovator, branded, and generic tablets, including formulations, methods for making tablets, the amount, and the types of excipients used. The preferred oral loose tablets are usually hard but quickly broken ones so that the tablets have resistance during the production, packaging, and distribution processes, but are quickly destroyed so that the active substance can be released immediately, and does not delay the time needed for the drug to affect. Excipients that affect the release of active substances include binders, crushers, and lubricants. Binder is needed because tablets are expected to meet friability requirements, which aim to be undamaged when the drug is distributed. Meanwhile, the destructive agent seeks to quickly make the drug disintegrate, usually through a liquid absorption mechanism, which makes the drug swell, then disintegrate. In addition to binders and crushers, lubricants are other excipients that can affect dissolution. Too much sliding, which is usually hydrophobic, will prevent the destruction of tablets and the release of active substances [19]. 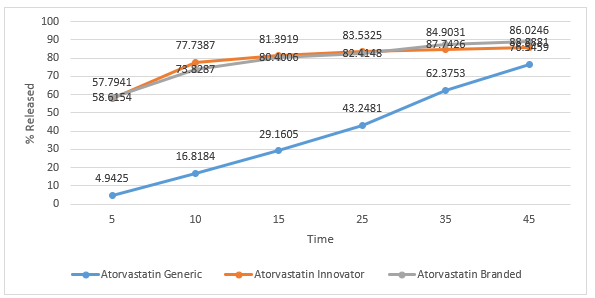 The authors thank the Universitas Sebelas Maret Surakarta for funding this research through an MRG grant.

The authors declared no conflict of interest.