Background: Cerebral palsy (CP), a heterogeneous disorder of gross motor development, is one of the most important causes of disability influencing children. Objective: To detect the influence of prone positioning on gross motor development in children with spastic diplegic cerebral palsy. Methods: Forty-two spastic diplegic CP children of both genders participated in this study. They were randomly chosen from the Medical Centre of Faculty of Physical Therapy, Modern University for Technology and Information, Cairo, Egypt. Their ages ranged from 12 to 18 months, with partial control of head and trunk according to gross motor function measure (GMFM), and mild spasticity (grade 1, 1+ according to Modified Ashworth scale(. Children were randomly assigned into control group, received selected physical therapy program based on the neurodevelopmental principles for 60 minutes, and study group received the selected physical therapy program in addition to a designed prone and quadruped exercise for 30 minutes. Treatment procedures conducted three times/week for three successive months. Results: The in-between comparison of GMFM showed no significant differences in the pre-measures while there were significant differences in the post-measures (t= 1.322, P= 0.194, t= 6.397, and P= 0.000, respectively). Conclusion: The results of this study revealed that prone position training program was effective in improving the gross motor skills in children with spastic diplegia.

Cerebral Palsy (CP) is a congenital non-progressive neurodevelopmental disorder that influences muscle tone, movement, balance, and motor control. The cause of CP is not always known but is typically the result of a prenatal or perinatal problem when the fetus’ brain does not develop normally or during the first five years of life as a result of trauma to the brain [1]. Insufficient monitoring perinatal period, increase unreported fetus health issues [2]. Besides, maternal health affects the health of babies [3] and even may cause perinatal mortality [4].

The clinical signs relay upon the size, degree, and area of the lesion. Despite the lesion is non-progressive, the signs and symptoms are variable. Improper treatment increases the risk for critical issues such as muscle and soft tissue contractures as well as bony deformities [5].

Spastic diplegic CP is a typical type of CP, characterized by more affection of the lower limbs, although the upper limbs are not spared. It is strongly related to prematurity. The periventricular germinal matrix is commonly affected by hemorrhage and hypoxic-ischemic insults [6].

The study design was a randomized control trial, which was conducted between December 2018 to May 2019.

The study was approved by the ethical committee of the Faculty of Physical Therapy, Cairo University, Egypt by P.T.REC/012/002375. Two copies of the written consent form were signed by the children’s parents for participation and publications of results.

Forty-two spastic diplegic CP children of both genders participated in this study. They were randomly selected based on the following inclusion criteria: their age ranged from 12 to 18 months, they had partial control of head and trunk according to GMFM, and mild spasticity (grade 1, 1+ according to Modified Ashworth scale). Exclusion criteria included: children with visual or auditory problems, epilepsy, and those with fixed deformities in upper limbs, lower limbs or trunk.

Forty-nine children with spastic diplegia were initially screened and assessed to determine age, diagnosis, inclusion, and exclusion criteria. From the screened children, only forty-five children fulfilled the inclusion criteria, one parent refused to participate in the study while the other two children didn’t follow the designed program and were excluded from the study. Thus, of the original pool, forty-two children with spastic diplegia were included in this study.

Children were randomly selected, using the roll of a dice, from the medical Centre of Faculty of Physical Therapy, Modern University for Technology and Information, Cairo, Egypt. Then, the random assignment of the children to one of the two groups (study and control groups) was done by using sealed envelopes. The randomization process was carried out by a registration clerk who was not involved in any part of the study (figure 1). 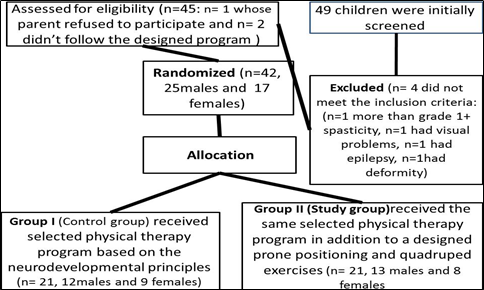 Figure 1: The dropout and allocation.

Children in the control group received a selected physical therapy program based on the neurodevelopmental principles for 60 minutes. While those in the study group received the same selected physical therapy program in addition to a designed prone positioning and quadruped exercises for 30 minutes. The treatment procedures were performed three times/week for three successive months for both groups.

The motor function of children with CP is usually evaluated utilizing the Gross Motor Function Measure (GMFM-88). It is an evaluative, standardized, criterion-referenced observational instrument that was developed to determine changes in gross motor function over time in individuals with CP. This measure has been considered for its reliability (intra-rater, test-retest, and interrater) and validity [9].

Facilitation of motor development: Children in both control and study groups received selected physical therapy programs including facilitation of head and trunk control, segmental rolling, and sitting milestones as well as facilitation of postural reactions, equilibrium, and protective reactions.

Flexibility exercises: These exercises were conducted to muscles and soft tissues liable to be tightened especially the Achilles tendon, hamstrings, hip flexors and adductors in the lower limbs and the shoulder internal rotators, elbow and wrist flexor, pronators of the upper limbs, to maintain the length and elastic recoil of the tight muscles. It was applied for 20 seconds and 20 seconds rest within the limit of pain with five repetitions [12]

Designed a program for study group: The program was applied in a quiet room. The program included:

A. From Prone positioning on the wedge: with the child’s head and upper trunk outside the wedge:

B. From quadruped position: With hand weight bearing on one upper limb and trying to reach object above the head with the other hand, alternatively [13].

All statistical calculations were performed utilizing the computer program IBM SPSS version 22 (IBM Corporation, USA). The sample size calculations were performed using the G*Power software (version 3.0.10). The gross motor function measure (GMFM) score was selected as the primary outcome measure. The effect size of GMFM was estimated to be medium (0.25). A generated sample size of at least 17 patients per group would be required. Allowing for a 20% dropout rate, it was necessary to reach a total sample level of a minimum of 42 patients. Test of homogeneity (Levene's test) revealed that all data were homogenous. Test of normality (Shapiro-Wilk test) was used before applying statistical analysis, and it showed that data were normally distributed, so parametric test was used (paired t-test within groups and independent t-test in-between groups). P-values less than 0.05 were considered statistically significant. 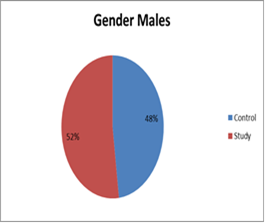 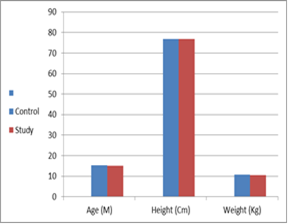 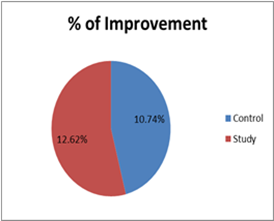 Figure 3: GMFM within and in-between groups.

Prone positioning is an important and critical part of the child's daily routine. It can be carried out at many different times throughout the day. It does not have to be limited to placing the infant on the floor but can be carried out while holding, carrying, and even dressing a baby which comes in agreement with Kuo et al. [14] who stated that parents should be informed that initial exposure to prone positioning can be implemented in a variety of ways, such as placing the baby on a caregiver’s chest when the caregiver is in a reclined position, placing baby on the caregiver’s lap, holding and carrying the infant in a prone position, and burping the baby in a prone position on the caregiver’s lap. So, in the study group, there were significant differences within measures (t= 13.152, P= 0.000).

The findings of the current study agree with Aliberti et al. [15] who found a significant difference in age for the attainment of many early motor milestones including rolling, sitting, creeping, crawling, and pulling to stand with the prone sleepers acquiring the milestones earlier than those sleep in supine. Similarly, Salls et al. [16] stated that regular prone positioning allows infants to develop head control at an early stage of life. Neck muscles are strengthened as they attempt to lift their heads to look around. Chizawsky et al. [17] mentioned that there are significant differences in the active movements of the arms and the pushing-up on the arms between the prone and non-prone infants.

Moreover, a significant difference between both groups with higher improvement in the study group may be related to the designed prone position program which was based on sensory stimulation including tactile stimulation, proprioceptive stimulation through weight-bearing positions, and stroking on the child's back from a prone position to enhance the gross motor function. So, the percentage of improvement in the control group was 10.74% while it was 12.62% in the study group. This opinion was supported by the study of Jennings et al. [18] who revealed that at ages of six months and 18 months, the average Peabody Developmental Motor Scales (PDMS–2) locomotion scores of babies consistently positioned in the prone position is higher than non-prone positioned children.

Moreover, varying positions for the infants were believed to be important for their motor development. Therefore, the control group indicated significant differences within measures (t= 6.874, P= 0.000). However, the prone position was of particular importance in the development of head control and antigravity extension which comes in consistence with Heard a Harris [19] who mentioned that prone extension is essential for the development of stability in various weight-bearing positions such as prone-on-hands, on all fours, and sitting. Hence, the lack of experience in the prone position may have a detrimental effect on the motor development of the infants.

Besides, placing the child in a prone position facilitates midline hand skills which come in consistence with Humphreys et al. [20] who found that placing the infant in prone position will gain upper body strength. So, the infant will be able to lift its head and chest in a more functional position to explore the environment on its own. So, the in-between comparison showed significant differences in the post-measures (t= 6.397, and P= 0.000).

Therefore, higher improvement in the gross motor abilities in the study group comes in agreement with Kajita [21] who mentioned that prone positioning encourages use of upper body strength used in acquisition of many infant motor milestones. It might be that supine sleepers lag in milestone development in the first year because the upper body contributes less to daily movement than for predominantly prone positioned infants. So, the previously stated hypothesis of no significant difference in gross motor function measure (GMFM) between children with spastic diplegic CP who received prone positioning and were not rejected.

The improvements in overall gross motor performances of the participated children as head control, pulling up, reaching, crawling, and other developmental milestones in the current study contradict the findings of Higgins et al. [23] who stated that placing the child in prone position made them rolled over at an earlier age than non-prone sleepers. However, no significant difference was found in other milestones.

The results of this study revealed that the prone position training program was effective in improving the gross motor skills in children with spastic diplegia.