Bisacodyl is used in the treatment of constipation, its mechanism of action was discussed by improving the evacuation of the intestines, which contributed to the effect of Bisacodyl's hydrolytic product (deacetylated compound) [1, 2].

It was found that the laxation effect occurs in oral administration within about 7 hours, but it does not take longer than 20 minutes for the application of Bisacodyl suppositories,

this suggests the local impact of Bisacodyl on colon motivation [3].

Bisacodyl suppositories dissolution test has not been officially listed in either B.P or USP yet. Therefore, the study's preliminary aim was to establish a proper system for the dissolution and determination method of analysis. In general, the dissolution medium is chosen to mimic the actual absorption site in the human body and is a colonic area in case of the dosage types of suppositories, where the pH is between 7.2 and 7.5 [4].

Bisacodyl substance is practically insoluble in water and soluble in dilute mineral acid as described by BP-2013, therefore it has poor solubility in an alkaline medium as it has been selected for dissolution medium (phosphate buffer pH 7.2) to be close to the colon in which it is the site of action for the suppositories [5].

Some researchers [8, 9] reported the use of solubilizing agents to enhance drug dissolution by adding PEG 400 or one of the SLS or Tween 80 surfactants in the formulation of suppositories, but this resulting in low physical stability of the suppositories and there is a possibility of mucous membrane irritation due to SLS in the rectal region.

In this work, an attempt to use beta-cyclodextrin as a solubilizing agent [10] by combining with the Bisacodyl solid inclusion complex and introducing it into the suppository base.

Beta- cyclodextrin is a cyclic starch derivative prepared by partial enzymatic starch hydrolysis (maltodextrin), it is often used in pharmaceutical formulation to improve the bioavailability of those poorly water-soluble or unstable drugs [11-13].

For the stability test of the innovative formula, the stability-indicating analytical method was needed to ensure specificity and sensitivity in the analysis of stored Bisacodyl suppositories.

The published UV-method and the HPLC method [14-16] For Bisacodyl identification in a dosage form as tablets were found not suitable for stability work.

The normal routine manufacturing process of Bisacodyl suppositories in Safa pharmaceutical industry (Baghdad) is by incorporation of Measured quantity of Bisacodyl powder in the sufficient quantity of suppository base (DUB PP DL - France) previously melted in small stainless steel mixer, set at 40 °C with continuous mixing for 15 minutes then the mass was poured into plastic sheet molds for suppositories containing 10 mg of Bisacodyl in each suppository of the total weight of 1.7 g (F1).

The innovative formula (F2) was prepared to contain 10 mg of Bisacodyl powder blended with Beta-cyclodextrin in a 1:1 molar ratio to produce a solid dispersion.

The powder mixture was then ground by the high-speed grinder and introduced as suppositories into a molten suppository base.

The effect of B-cyclodextrin on the composition of Bisacodyl powder in the formed inclusion complex was studied by IR-spectrophotometry.

Bisacodyl Suppositories' quantitative analysis on assay and dissolution was determined by a developed HPLC technique. The HPLC method included the use of a reversed-phase mode of chromatography with the following conditions; column of C18, 25 cm length and 5µm particle size. The mobile phase composed of a mixture of acetonitrile and buffer solution (70:30), a sodium citrate solution 0.05 M buffer solution optimized to pH 7.0 was prepared with dilute sodium hydroxide solution, the flow rate was 1ml/minute and the UV-detection at 230 nm.

Evaluation of the new prepared formula of Bisacodyl suppositories

Samples of prepared Bisacodyl suppositories (F2) in their packaging were stored in a stability chamber that was set at room temperature (30⸰C and 65% RH of Iraq), and the physicochemical properties of the suppositories were checked in intervals during the storage time that lasts for 2 years as a real stability test program.

The IR-spectrum before and after complex formation (Bisacodyl with beta-cyclodextrin) is shown in the figures (1 to 3). 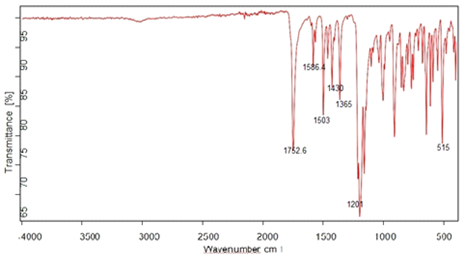 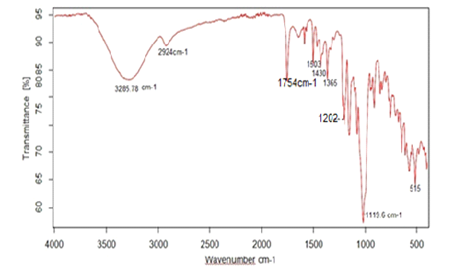 The Bisacodyl peaks with frequencies characteristic of 1752.6 cm-1, 1201.2 cm-1 and at 515 cm-1 are still present in the beta-cyclodextrin complex IR spectrum suggesting incomplete inclusion due to physical mixing that varies from the bending phase in which water is added. However, the Bisacodyl complex showed more solubility in water due to the hydrophilic effect of the hydroxyl group (frequency 3285.78 cm-1) in the solid-inclusion complex with beta-cyclodextrin.

Two different formulations of Bisacodyl suppositories (F1 & F2) were tested and the results are shown in Table 1.

These results indicate no difference in the physical properties particularly the melting point, and disintegration times with the new formulation (F2), which includes the additive beta-cyclodextrin.

The developed HPLC method was applied for quantitative analysis of bisacodyl suppositories 10 mg in 500 ml of dissolution medium. the resulted chromatogram showed a retention time of about 9 minutes for Bisacodyl and the efficiency of the column was more than 5000 number of plates (figure 4). The relationship of peak areas and the various dilutions of Bisacodyl solution in a range of (0.5 - 3.0 mg/100ml) showed a straight-line plot with a correlation coefficient of 0.998, which indicated high precision of analysis (figure 5).

Figure 4: The HPLC Chromatogram of Bisacodyl in Suppository

Figure 5: The straight-line relationship for Bisacodyl concentrations and their peak areas

The chemical assay and dissolution test results of the prepared Bisacodyl suppositories and other commercial products are found in table 2, and the competitive dissolution profiles of these products are identified in figure (6). 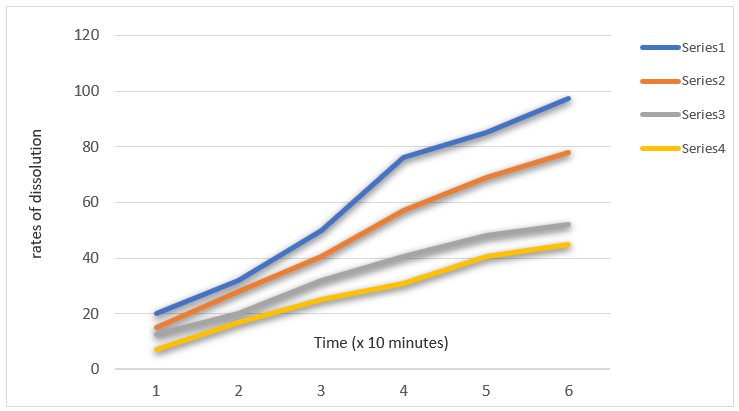 The physical properties of the suppositories along the two years of storage were within the specified conditions. In addition, the HPLC assay of Bisacodyl suppositories at the last month of storage for five samples gave an average 99.2% of Bisacodyl relative to the labeled amount and the relative standard deviation (RSD%) of these five samples was 0.3%. The HPLC chromatogram of the analysis for the stored samples of innovated formula did not show any secondary peak rather than a Bisacodyl peak, indicating the absence of any sign of degradation.

The authors would like to thank the group of Al-Safa Company of pharmaceutical industries (Baghdad) for their support in supplying the chemicals during experiments and the department of pharmacy/Al-Rasheed University College for the assistance and guidance during the completion of this study.