Analysis of the Ukrainian market of medicines for gastrointestinal disorders treatment

Marketing research of medicinal products of the Silicone group (ATC code - A03A X13) for the treatment of gastrointestinal tract diseases has been carried out. Based on the results of the analysis of the pharmaceutical market, a sufficient number of registered drugs have been determined, among which drugs of Ukrainian origin insignificantly dominate. It has been established that 100% of registered silicone drugs are represented in the wholesale market. Structural analysis of dosage forms has shown a significant dominance of silicones in the form of oral drops (33% among 5 dosage forms of silicones). Evaluation of the economic availability of silicones within each dosage form has made it possible to state that the lowest DDD cost of silicone drugs corresponded to the form of chewable tablets, the highest - to oral suspension.

In recent years, the scientific press and congresses have widely covered the problem of colic in children [1-3]. In our opinion, this is primarily due to the fact that the number of children with this condition has increased significantly [4], and the available therapies do not always fully satisfy not only doctors but also parents. According to various authors, baby colic occurs in 20-48% of children in the first year of life.

When considering a baby colic correction program, the mother's diet should be the first thing to pay attention to. According to modern notions, severe colic is most often associated with food allergy to cow's milk protein, so if the baby is breastfed, it is necessary to completely exclude all dairy products, and sometimes beef and veal from the mother's diet.

The safest and most effective way to treat colic in children is to use defoamers (simethicone drugs). They are modern effective and safe means against baby colic. The mechanism of action is based on the weakening of the surface tension of gas bubbles in the digestive tract, which leads to their breaking up and subsequent excretion of gas from the body [5, 6].

Simethicone drugs are inert, are not absorbed from the gastrointestinal tract, and do not affect gastric secretion and absorption of nutrients. After oral administration, simethicone is excreted unchanged in the feces [7-9]. There is no addiction to it. Simethicone represents one of the final preparations for oral application, which eliminates the gases from the gastrointestinal tract in patients for IVU. It is an antiflatulent that reduces gases-caused symptoms of the gastrointestinal tract. The drug is in the form of soft gelatin capsules taken orally, at any time and any place, because the capsules can be easily swallowed without water. Each capsule contains 40 mg of active ingredients – simethicone [10]. Simethicone works by changing the surface tension of gas bubbles trapped in the food and mucous alimentary canals. First, it reduces the surface tension of gas bubbles and then degrades it. Liberated gases can be easily absorbed through the intestinal wall or eliminated by enterokinesis. It should be emphasized that simethicone acts purely physically, does not enter the circulation, and does not participate in chemical reactions [11-15].

The aim of the work is to analyze the Ukrainian market of drugs for the treatment of gastrointestinal disorders from the group of ATC A03A X13 "Silicones".

The analysis of the market of drugs from the group of "silicones" has been carried out. The study used data from the State Register of Medicines, articles in scientific journals, price lists, and information from the official websites of manufacturers and distributors of medicinal cosmetics, as well as the range of pharmacies in Kharkov. Methods of comparison, as well as logical, mathematical, and statistical methods were used [16, 17].

State form of medicines, current issue No. 11, approved by the order of the Ministry of Health of Ukraine No. 892 "On approval of the eleventh issue of the State Form of Medicines and ensuring its availability" dated April 18, 2019 [18], which contains recommendations for the rational choice and use of drugs, taking into account the effectiveness, safety and economic feasibility of their use in the pharmacotherapy of diseases and conditions in section 3 "Gastroenterology"; there are 2 silicone preparations (COLIGAS-ZDOROVYE, oral drops and chewable tablets), which confirms the importance of silicones in the treatment of gastrointestinal diseases. Simethicone drugs (silicones) are also included in the standards of medical care, in particular in the sections "Gastroenterology" and "Pediatric Gastroenterology". The need for the use of silicones in the treatment of common diseases and conditions determines the relevance of the market analysis of this group of drugs.

The study has analyzed the pharmaceutical market of silicone drugs (international non-proprietary name, INN - silicone), registered in Ukraine, as well as offers of medicinal products of silicones, presented on the wholesale domestic market by distributors.

Structural analysis of registered drugs by INN "Silicones" has shown that 8 drugs (or 53%), including DFs, are represented by domestic manufacturers, and 7 drugs (47%), respectively, by foreign companies. Thus, in the pharmaceutical market of Ukraine, there is an insignificant dominance of domestic silicone drugs, which is a positive trend (Figure 1).

Among foreign companies producing silicones, the largest number of registered drugs, including DF, is presented by the company Berlin Chemie" (Germany) with 3 names, followed by "Catalent Germany Eberbach GmbH" (Germany) with 2 names. One medicinal product is registered by companies " Pharmaceuticals NV" (Belgium) and «Orion Corporation» (Finland). 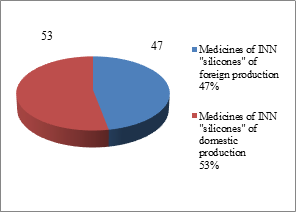 Figure 1. The share of drugs registered in Ukraine under the INN "Silicones" on the indicator "domestic/foreign" (as of 01.02.2020)

Thus, the largest share among the countries, importing drugs under INN "Silicones" to Ukraine belongs to drugs of German production (5 names including DF), with more than 70% of the total number of registered silicones of foreign production. Silicones made in Belgium, Finland, and France are also available on the domestic market. In total, as of 01.02.2020, 4 foreign companies have registered 7 drugs (including DF) of INN "silicones" on the domestic pharmaceutical market.

The next stage of the study was the analysis of silicones registered on the domestic pharmaceutical market as of February 2020, by dosage forms. It was established at the time of the study, registered drugs for INN "silicones" are liquid (53% of the total) and solid (47%) dosage forms. Liquid dosage forms are represented mainly by oral drops (5 drugs, 3 of which are foreign-made), as well as suspension (2 drugs, one domestic and one of foreign production). Solid DF of silicones registered in Ukraine is represented by tablets (4 medicines of domestic production) and soft capsules (2 names of domestic and foreign production) (Figure 2). It should be noted that foreign silicone drugs are represented mainly by oral drops. At the same time, tablets are offered only by domestic manufacturers. 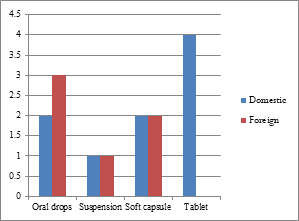 Figure 2. Distribution of medicinal INN "silicones" registered by dosage form in Ukraine (as of 01.02.2020)

Thus, the study of the domestic market of registered drugs under the ATC code A03A X13 silicones allows us to conclude that there is a sufficient range of drugs in this group, both foreign and domestic production, which, of course, is a positive trend. It can be expected that the presence of four different dosage forms contributes to the proper quality assurance of silicone therapy.

To analyze the physical availability of silicone drugs in Ukraine, we have analyzed the wholesale market of drugs of this group, namely the offers of distributors. The online database of the Morion analytical search system has been used for the analysis, in particular, the section "Wholesale Offers" as of February 2020 [19].

It was found that in the proposals of distributors more than 90% of drugs from the study group were presented (14 out of 15 drugs). There was only one medicine absent - ESPUMISAN® Baby («Berlin Chemie», Germany). At the same time, at the time of compilation of the results of the study - 06.03.2020, this drug was present in the offers of distributors. Therefore, it can be stated about 100% presence on the wholesale pharmaceutical market of all drugs registered in Ukraine under INN "Silicones". In further calculations, the data as of March 6, 2020, were taken into account.

The analysis of the wholesale market of drugs should be carried out taking into account the dosage forms and the number of doses in the package. Thus, it has been established that in the domestic wholesale pharmaceutical market 10 trade names of drugs from the pharmacological group "silicones" are represented by 18 preparations (Table 2). 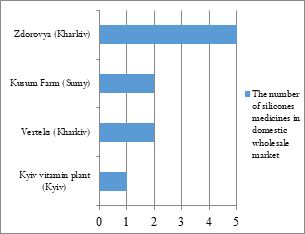 Figure 3. Distribution of domestic silicone manufacturers by the number of drugs represented on the wholesale pharmaceutical market of Ukraine as of March 2020

It was found that the largest number of silicone products in the domestic wholesale market corresponded to Pharmaceutical Company "Zdorovya" )50% of all drugs of domestic production(, 20% of the market was occupied by drugs of "Kusum Pharm" and Pharmaceutical firm «Verteks», and 10% by medicines of Kyiv Vitamin Plant. Among foreign manufacturers, the largest share of medicines in the domestic wholesale silicone market was occupied by the company "Berlin Chemie" (Germany) (more than 60%); 12.5% of imported drugs were for other companies (Figure 4).

In general, the leaders of foreign and domestic segments (Berlin Chemie and Pharmaceutical company "Zdorovye" respectively) in the proposition of domestic and imported silicones in the wholesale pharmaceutical market occupied the same market share of silicones - slightly less than 30%. That is, it is desirable to increase the number of domestic drugs, which will facilitate the availability of silicones for the population. 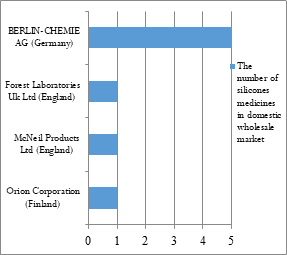 Figure 4. Distribution of foreign producers of silicones by the number of drugs (including DF) in the wholesale pharmaceutical market of Ukraine (March 2020)

Given the feasibility of the development of domestic drugs of the "silicones" group, it may be interesting to analyze the dosage forms of drugs of this group, which are presented on the wholesale market as of March 2020. 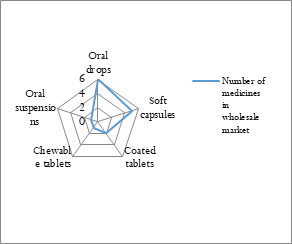 Figure 5. The results of the analysis of the domestic wholesale market of silicones by dosage form (March 2020).

One of the important indicators of the affordability of drugs for the patient and the health care system as a whole is the price. Therefore, the next stage of the study was the analysis of drug prices for INN "Silicone", which are presented on the wholesale market as of March 2020. The data were obtained from the online press lists of the weekly "Pharmacy" by the analytical company "Morion".

Table 1 shows the minimum and maximum purchase prices for drugs offered by distributors for the study period. To properly compare the cost of medicines, we calculated the average purchase price. However, differences in the number of units of the active substance in each package of drugs do not allow for an equilibrium comparison of prices, so the next step was to determine the cost of the daily defined dose (DDD) - DDD of A03AX13, Silicones that is 0.5 g [https://www.whocc.no/atc_ddd_index/?code=A03AX1].

We have ranked medicines within each of the dosage forms; it was found that the average purchase price of the defined daily dose is the lowest for silicones in the form of chewable tablets - 9.64 UAH. This value may be due to the fact that in this DF is presented only by domestic manufacturers, which significantly increases its economic affordability. The most expensive of all drugs were oral suspension, with the average purchase price of DDD - 31.43 UAH.

The performed structural analysis of the average purchase price of the DDD within each dosage form can be used in the future by manufacturers of new silicone products to form a competitive price in this segment of the domestic pharmaceutical market.

In general, the results of the analysis of the domestic pharmaceutical market of medicines for INN "Silicone" have identified a sufficient number of registered drugs, among which insignificantly dominate domestically produced drugs. It was established that 100% of the registered medicines of the silicone group are represented in the wholesale market. Structural analysis of dosage forms showed a significant dominance of silicones in the form of oral drops (33% among 5 DF of silicones). Evaluation of the economic availability of silicones within each DF has allowed us to state that the lowest cost of silicones DDD corresponded to the chewable tablets, and the highest cost to oral suspension.

All authors declare that there is no conflict of interest among the authors.