Thermodynamics of Si etching and removal of the oxide layer from Si cluster surface using KOH solution: A DFT study

Silicon [1, 2] is a critical semiconductor in the manufacturing of many electronic devices [3, 4], solar cells, computers, etc. Many of these manufacturing processes include the removal of the surface oxide layer that usually acts as a contact insulator. The removal process includes either alkali agents such as potassium hydroxide (KOH) or acids such as hydrogen fluoride (HF) [5]. Due to the toxicity of HF [6], the use of HF is less desirable with respect to the less toxic KOH. However, the use of KOH encounters some difficulties especially when the oxide layer is thick (several nanometers). The process of using KOH to wet etching Si surface can be managed to produce a surface with low roughness and high

surface quality [7, 8]. This method of etching also enhances the mechanical properties of Si [9]. The etching rate can be increased using additives such as alcohol [10]. The temperature at which the etching is preferable is at 80°C or near the boiling point of the KOH solution [11].

Thermodynamic simulation using density functional theory of many chemical reactions proved to produce further information and illustrations that complete our understanding of the reaction process [12, 13]. The simulation can predict approximate temperatures in which the reaction peak or minima is desired. Quantities such as the change in Gibbs free energy, enthalpy or entropy is of vital importance to determine whether the reaction will proceed or not, the heat of reaction, and the order-disorder direction of the reaction.

In the present work, we investigated theoretically the removal of silicon and silicon oxide layers from the surface of the silicon cluster shown in Fig (1). Depending on the kind and thickness of the silicon oxide layer, several reactions were investigated including the reaction of molecules or ions. A comparison with the experiment was performed whenever such experimental data was available.

In the present work, we used B3LYP (Becke, three-parameter, Lee-Yang-Parr) density functional theory (DFT) combined with 6-311G** basis functions that are suitable in terms of accuracy and time and computer resource consumption [14]. Si14 cluster in Fig (1a) was used to simulate the unoxidized silicon surface. This cluster was suitable since oxygen molecules and atoms experience the same effect within the bulk silicon surface including three to four neighboring atoms. Mainly three kinds of oxides can occur on the surface of this cluster. If only one bond from the two bonds that connect the two oxygen atoms in the oxygen molecule is broken, then oxygen (bridge) is formed on the surface of the silicon cluster as in Fig (1b). If the two bonds of the oxygen molecule are broken, then the silicon oxide will look like that in Fig (1c) that we shall refer to as (surface) oxidation. Repeating the last oxidation process (surface oxidation) several times, a piece of silicon dioxide (SiO2) will be created as in Fig (1d) which we shall refer to as (complete) oxidation. Other reaction reactants and products such as O2, H2, H2O, K2SiO3 or ions such as K+ and OH- are simpler to represent using our above theory since they are either in the gas or aqueous phase. Gaussian 09 suite of programs was used to perform present calculations [15]. A complete discussion of the relevant equations was used in the Gaussian 09 program to calculate thermodynamic quantities given in the Gaussian 09 report [16].

The reaction of oxygen with the Si cluster can be viewed as a three-step reaction as we discussed above. The first step is the formation of the oxygen bridge (breaking one bond between oxygen atoms) on the Si cluster surface as shown in Fig (1b) and the second step is the surface oxidizing reaction (breaking the two bonds between oxygen atoms) as shown in Fig (1c). Thermodynamic quantities of these reactions are shown in Table 1 (reactions 1 and 2) at 25°C and 1 atmosphere. Gibbs free energy of these two reactions was -4.509 and -8.028 eV for the bridge and surface oxidation reactions respectively. The temperature variation of these two reactions (0-100 °C) is shown in Fig (2). This figure shows that a small change of the above energies occurs as we increase the temperature. As the oxidation process proceeds, a layer of silicon dioxide is formed similarly to that of Fig (1d) that can be described by reaction number 3 in Table 1. Reaction number 3 in Table (1) is normalized to the reaction of one silicon atom with one oxygen molecule to be compatible with reactions 1 and 2. The value of Gibbs free energy of this reaction is -8.65 eV which will proceed depending on the ability of O2 molecules to diffuse through silicon lattice.

As a strong base, KOH partially dissociates in its aqueous solution as in Table (1) reaction 8. The degree of dissociation depends on temperature, concentration, and dissociation constant in addition to other factors. The dissociated ion fragments of KOH (K+ and OH-) reacts with surrounding water molecules creating solvation shell around each ion [17-20] as in Fig (4) for the K+ ion. On the other hand, the reaction of the ions with silicon surface oxide gains the extra dissociation reaction energy (6.895 eV) as in reactions 9-12 in Table (1). Although these reactions with the ions are now energetically favorable, their reaction rates are very weak because of the hydration shell that creates dragging force on the ions. The complete neutral KOH molecule has a smaller hydration shell, and as a result, KOH molecule reaction rates are an order of magnitude faster than their ions. Experimentally, the reaction rates of reactions that are favorable with KOH molecules are in the order of microns/hour while reactions that are favorable only with ions are in the order of nm/hour [21, 22]. Fig (5) shows Gibbs free energy of Si etching and surface oxidation removal by K+ and OH- ions as a function of temperature including bridge, surface, and complete oxidation.

Enthalpies of reactions are calculated in Table (1) to show the amount of heat released or absorbed in each reaction. Oxidation reactions are exothermic reactions which are also the case of ionic reactions as in Table (1). KOH reactions are endothermic reactions except for oxide bridge and most Si etching reaction range (2-93 °C). The entropy of etching, oxidation and oxide removal discriminate order-disorder reactions. All KOH molecule reactions have positive entropy values (disorder reactions) while oxidation reactions and K+ and OH- ions reactions have negative entropy values (order reactions) as in Table (1). To check the correctness of our thermodynamic calculations, we can use SiO2 experimental formation energies which are well-tabulated quantities [23]. The SiO2 experimental Gibbs free energy, enthalpy and entropy formation energies are -8.876 eV, -9.439 eV, -1.888×10-3 eV/K respectively [23]. These values can be compared with our calculated values for bridge oxidation, surface oxidation and complete oxidation of Table (1) (reactions 1, 2 and 3 respectively). Good agreement can be seen with the complete oxidation. All Gibbs free energy, enthalpy, and entropy values gradually increase towards the experimental values mentioned above except surface oxidation entropy in reaction 2 in Table (1). This can be interpreted by the disorder that is formed when the two oxygen atoms entered the Si surface. However, when all the silicon atoms are oxidized, a kind of order is formed that decreases the value of entropy (negative value) towards its value in the complete oxidation reaction 3. The number of ions and the reactivity of materials increase with temperature. As can be interpolated from Fig (3), the temperatures of negative Gibbs free energy of Si etching reaction are in the range of 2-93 °C which includes the experimentally preferred temperature for silicon etching at 80 °C [24-26]. Usually, when we conduct a reaction at higher temperatures, a higher number of collisions between particles take place as described by collision theory. This explains why higher temperatures in the range of negative Gibbs energy is preferred. References [12-16, 27] give a suitable description of the equations that are involved in the present calculations.

Thick layers of SiO2 may be removed from the Si surface using heated KOH but with a slow rate compared with Si removal. The Si etching rate depends on the kind of Si surface exposed to KOH. The rate of SiO2 removal is in the range of 300 nm/hour for a 30% KOH solution at 80 °C. HF can also remove native silicon oxide. However, HF toxicity can reach fatal levels if not used with precautions. KOH can irritate skin or eyes, but it is nontoxic and rarely reaches fatal levels. Experimentally, KOH can etch Si surface roughly if used with concentrations less than 30%. Small concentrations of KOH are not quantitatively adequate to remove both Si and its oxide. The high rate of Si etching in concentrated KOH will remove Si and its oxide in a competing speed and reduces roughness by moving around the SiO2 layer by removing Si. 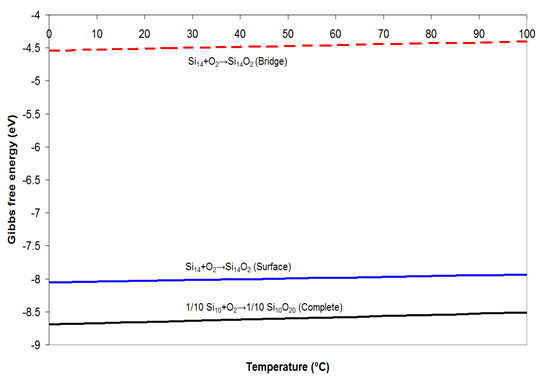 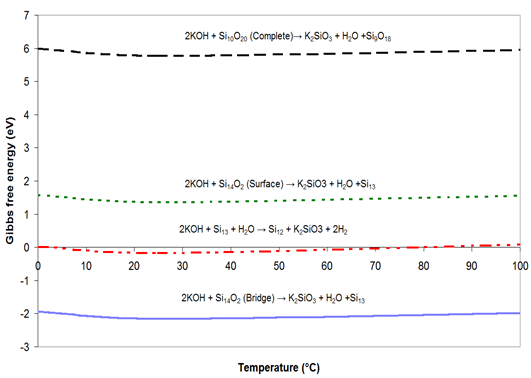 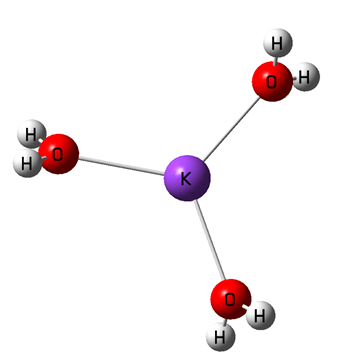 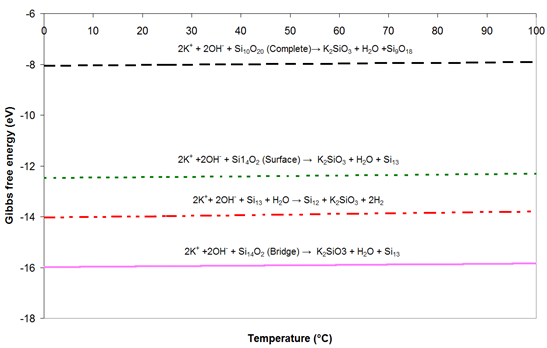