Introduction: Polycystic ovary syndrome (PCOS) is a hormonal disease that affects many women worldwide, with symptoms that include insulin resistance, hair growth, irregular menstrual cycles, and in some cases, infertility. Obesity continues to be quite prominent around the world, and there have been some reports of a relationship between obesity and PCOS, although few studies have explored this in the Arab World. Therefore, the objective of this study was to test the association between PCOS and obesity in a population of university students at a major university in Saudi Arabia. Methods: A population-based cross-sectional study, in which an online questionnaire was sent to 150 female students studying pharmacy at Princess Nourah University in Saudi Arabia in March 2020.  100 students responded to the questionnaire, which included questions on medical information, especially ones related to PCOS symptoms. Results: The prevalence of self-reported PCOS was found to be 16%. 19.4% were overweight and 6.1% were obese, while 28% of obese and overweight had PCOS. This indicates a positive association between obesity and PCOS, but no significant relationship between PCOS and being underweight was found. Conclusion: While there is a relationship between obesity and PCOS, it is unclear whether obesity is a risk factor for PCOS or not. However, there should be intervention programs that tackle this relationship. Future studies should explore this relationship further and focus on whether it is a causal relationship or not.

Polycystic Ovary Syndrome (PCOS) is a common hormonal condition that affects women of reproductive age. This endocrine disorder has been proven to be genetic through twin studies. [1] It is marked by a resistance to insulin,[2] and is often also associated with hyperandrogenism, in which there is a significant increase in hormones more commonly attributed to males, such as androgens, including testosterone. [3] Other symptoms include hirsutism (excessive hair growth in irregular areas), irregular menstrual cycles, infertility, and polycystic ovarian morphology (PCOM), which is the presence of a significant number of preantral follicles within the patients’ ovaries. [3] Women with PCOS are most likely to present to a physician because of infertility, followed by hirsutism and menstrual irregularities. [4]

PCOS is related to metabolic syndrome and its abnormalities [5]. PCOS has been linked to an increased risk of type-2 diabetes, [6] and studies have shown that they are more likely to develop anxiety, depression, and eating disorders.[7] While this disorder is mostly seen among women of reproductive age, symptoms of it have been seen in prepubescent and post-menopausal women. [3] The worldwide prevalence of PCOS (according to the 2003 Rotterdam criterion) has been reported to be between 4% and 21% [8] and is 16% in the Middle East.[9] Some studies have indicated that Middle Eastern women are more likely to develop PCOS than Caucasian and Asian women, but less likely than Black women.[9]

Studies have shown that it is linked to obesity, [10] with one study concluding that 2/3-4/5 of PCOS patients suffer from obesity as well. [11] While this linkage has been explored in international research and some Arab studies, [12] there remains a need to find a measurable analysis of the relationship between PCOS and obesity/being overweight in Saudi Arabia and the Arab world. The prevalence of obesity and its complication such as coronary heart disease, diabetes, hypertension, and hyperlipidemia is increasing nowadays [13]. Overweight and obesity are widespread in developed and rich countries, while malnutrition and low body weight are found mainly in developing countries [14]. Today, adipose tissue, as an active endocrine system, by producing fatty acids and secreting several types of proteins regulates hormones of absorbing and consuming energy [15]. One Saudi study concluded that the prevalence of PCOS in Madinah is 32.5%, [16] yet more research is still needed throughout the rest of Saudi Arabia. Therefore, the main objective of this research is to measure the prevalence of self-reported PCOS among Saudi women and to examine the link between obesity and PCOS. This condition affects a great proportion of women, and it is necessary to quantify this effect, to be accurately informed and equipped to advise on measures for awareness and treatment.

An online questionnaire was emailed to 150 randomly selected pharmacy students (n=150) from Princess Nourah University to assess the prevalence of self-reported PCO in March 2020. The questionnaire was developed by the team of experts and included information on certain factors for example self-reported height and weight, information related to PCO, medication, and symptoms related to PCO were also collected. Of the total 150 pharmacy students, 100 returned the questionnaire giving the response rate of 66.6%.

Data on self-reported PCO was collected from 100 Saudi national pharmacy students. Of the total 100 students, 99% have heard about PCOS. Of total 74 (74%) were of age 21-25 and 16% reported having confirmed diagnosis of PCO and only 6(6%) were taking some medication. Of total 74 students reported about the clinical visit for PCO and among those 31(31%) reported that they have visited the clinic for PCO. Majority 55 (57%) have heard about PCOS from family or friends while 30% have heard from the health care provider. (Fig 1) 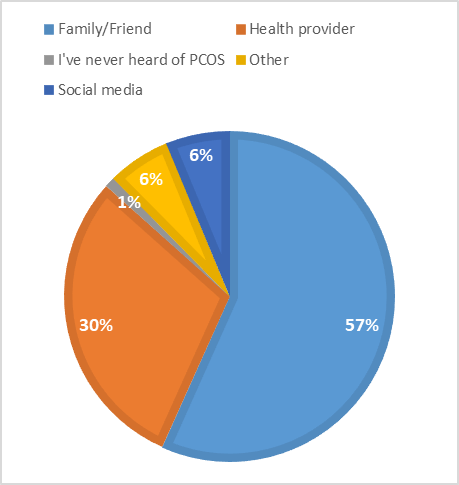 Figure 1:  Source of information about PCO among study participants (n=100)

*Others include self-diagnosis, online research

The majority of students reported irregular periods (23%) and hair loss (22%) as the main and only symptoms while other patients reported multiple symptoms and 24(24%) reported no symptoms. (Fig 2) 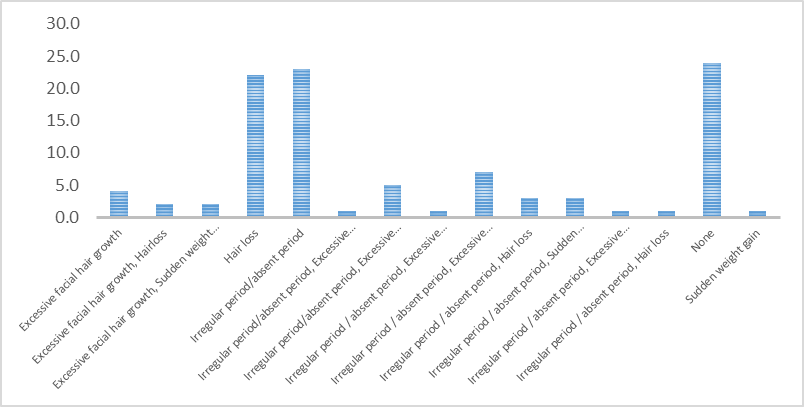 Out of 100 participants, 16 had PCOS, making the prevalence 16%. Moreover, 28% of obese/overweight students had PCOS indicating a significant relationship between obesity and PCOS. The most common symptoms were irregular periods and hair loss, with some reporting multiple symptoms simultaneously, or no symptoms.

Several methodological issues need to be discussed. The study has several limitations. For instance, the sample size was quite small. Students from only one university were included, although it was a major university in Saudi Arabia. All the students also studied in the same department¾pharmacy¾which could have affected their awareness of PCOS and other medical issues. Additionally, they were not asked about other medical issues they may have had or their lifestyles (such as their eating habits or how often they exercise), which could have affected their weight regardless of PCOS. Moreover, some studies have indicated that BMI is not an entirely accurate measure of obesity. [17] Another limitation is that this study only measured the self-report of PCOS without checking the participants’ medical records, which may result in inaccuracies or inconsistencies. However, the study does have several strengths as well. Firstly, the study was conducted on a random sample of students and is a major public educational institution in Saudi Arabia, which is Princess Nourah University.

The findings of the current study have several implications. For instance, the study found a significant relationship between obesity and PCOS. It is not clear whether obesity is a risk factor or symptom of PCOS, or neither. However, although it is not clear if the relationship is causal or not, obesity should be targeted as a public health issue. Intervention programs should be implemented that target obesity to help women who struggle with PCOS. Doctors should test or check for the symptoms of PCOS among female patients, especially ones that are overweight or obese, to allow for early detection and proper treatment of this disease.

This study found that the prevalence of PCOS among females in a population of Saudi Arabia is 16%. It was observed that there was a significant relationship between obesity and PCOS, while there was no significant association between PCOS and being underweight. Future studies should be longitudinal to explore whether this relationship is causal or non-causal.

The authors would like to acknowledge all pharmacy students at Princess Nourah Bint Abdulrahman University, who participated in this study for their kind support.

This research was funded by the Deanship of Scientific Research at Princess Nourah bint Abdulrahman University through the Fast-track Research Funding Program.